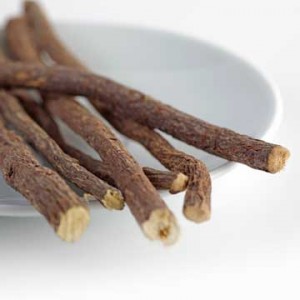 Q – I have been suffering from stomach pains which have been diagnosed as an ulcer.   A friend of mine who had a similar problem recommends that I try liquorice.  Does this work and what other natural approaches can I try?

A – Ever since it was discovered that nearly 70-75% of those with gastric ulcers and 90-100% of those with peptic ulcers also have the helicobacter pylori bacterium in their guts, the scope for treatment of this uncomfortable condition have expanded tremendously.

It is not known whether H. pylori is as direct cause of ulcers or whether it is simply a contributing factor. However it appears to bury itself in the intestinal cells where it secretes an enzyme which causes the breakdown of the guts mucosal lining.

Herbs can help because many of them are effective antibiotics but produce much fewer side effects.

A great deal of research has been made into the use of liquorice roots (Glycyrrhiza glabra) as a potential treatment.  Liquorice root contains several ulcer soothing compounds. Early research focused on glycyrrhetinic acid, but subsequent studies have shown that deglylcyrrhizinated liquorice (DGL) could be even more effective but without the potential unpleasant side effects. It is thought that DGL may increase mucous production therefore protecting the gastric mucosa.

Many DGL supplements come in chewable form because when mixed with saliva it enhances the efficacy of DGL’s natural compounds.

Several human studies show that using liquorice root may promote healing and there is some evidence to suggest that that it might also help prevent ulcers caused by anti-inflammatory drugs.

Glycyrrhetinic acid (also known as carbenoxolone sodium), could also be helpful. One study found that 100 mg three times daily for six weeks was as effective as 50 mg daily of the conventional medicine piremzepine.  After 6 weeks ulcers in similar number of patients had healed. In other studies a similar daily amount of glycyrrhetinic acid has been shown to be significantly more effective than 800 mg of the conventional drug cimetidine and nearly three times more effective than a placebo.

Not all herbalists favour the use of DGL since it is a synthesised version of the real thing.  One reason why it is used is that if ingested regularly in large doses liquorice root in amounts greater than 3 grams daily and glycyrrhizin in more than 100 mg daily may cause sodium and water retention, changes in the body’s electrolyte balance, hypertension and, depleted potassium reserves.

The decision of which liquorice preparation to use should therefore be based on good diagnosis of the individual’s needs and potential weaknesses since individual response to glycyrrhizin can vary widely.

An unusual, but apparently effective remedy for ulcers is cabbage juice.  This is a remedy which goes back to the 1950s when researchers at Stanford University School of Medicine in California, USA demonstrated that fresh cabbage juice was extremely effective in the treatment of peptic ulcers, usually within seven days. The recipe used was ½ head or 2 cups of green cabbage, 4 stalks of celery and 2 carrots. The vegetable should be put through a juicer and the mixture drunk fresh.

Indian physicians often treat ulcers by prescribing Musapep, a dried powders made from plantains. The success rate of this simple treatment is reported to be around 70%. Although it was once thought that banana works by neutralising stomach acid, studies suggest that it may help to strengthen mucosal resistance and promote the healing of ulcers.

Papaya leaf has also been shown to be helpful in treating stomach ulcers. Animal studies have shown that papaya can help reduce the number of stress related symptoms of ulcers. Its tendency to coagulate blood may help reduce bleeding in some types of ulcers – thought this means it should be used with caution if you are risk of blood clotting disease. If in doubt always consult a practitioner.

No need for restrictive diets

Finally while many ulcer sufferers are told to stick to a bland and restricted diet there is little evidence that this is desirable. Certainly ulcer sufferers should up their intake of fibre rich foods which may have an ulcer protective effect and avoid acid producing foods and drinks such as coffee, tea and alcohol. But there appears to be no evidence for avoiding the odd curry or Mexican meal.

When researchers in Texas compared several different types of meals they found that a spicy meal such as Mexican enchiladas beans and rice topped with hot sauce and hot peppers did not harm the stomach lining. As well as peppers, you might also try including fresh ginger in your diet since this is also has a gastroprotective effect.

What else can help?

Other dietary and lifestyle measures that can help heal ulcers include

Fibre has a role in keeping the mucosal layer of the gut healthy. A diet rich in fibre, particularly the water soluble fibre found in fruits and vegetables, can be both healing and preventative. Studies in Scandinavia have shown that red and white beans have the ability to mop up excess stomach acid. Also good were corn and unpolished rice. The fibre content of these foods will also help protect the gut lining. Anecdotal evidence from India also suggested that a whole food diet – chewed thoroughly – can help bring healing.

Supplements Take a good quality multivitamin and mineral supplement. Numerous nutrients have been shown to influence the health of the gut. Most important of these are A, C, E and zinc.

Is it allergies? There is some evidence that food allergies can contribute to the development of peptic ulcers. Studies show that those who have a high consumption of milk also have a higher risk of developing ulcers. So before you try to soothe an ulcer with milk make sure that milk allergy isn’t the problem in the first place.

Don’t smoke. Smoking raises the risk of developing ulcer and lowers the chances that any therapy you choose will be successful.

Deal with stress instead of avoiding it.  While there is little evidence to suggest that stress causes ulcers to develop, there is some evidence that people who do get ulcers, tend to repress feelings rather than express them.