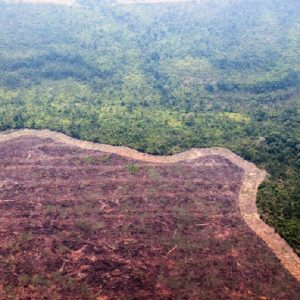 Soya in the meat and dairy supply chains of UK supermarkets could be contributing to illegal deforestation in the Amazon.

A new joint investigation by Unearthed, the Bureau of Investigative Journalism and Ecostorm has revealed that a loophole in the so-called Amazon Soya Moratorium renders supermarkets’ customer-friendly claims of ‘deforestation-free soya’ near meaningless.

Soya is a key commodity used by dairy, cattle, pig and poultry farmers in Europe and the rest of the world to feed their livestock.

The findings undermine eco-friendly claims by some global meatpackers, animal feed companies and supermarkets that soya is no longer linked to Amazon destruction.

Deforestation by the back door

The Amazon Soy Moratorium  – first agreed in 2006 – bans the sale of soya grown on Amazon land deforested after July 2008. But beef and other crops are not restricted under the soy moratorium, meaning farmers can sell their soya to traders as “deforestation-free” while destroying rainforest for cattle, corn and other commodities.

Evidence suggests that the moratorium has successfully stopped rainforest being directly converted into soya fields. However, soya farming has continued to expand in the Amazon, overwhelmingly on land that was previously cleared, usually for cattle. That expansion can still indirectly cause fresh deforestation, as ranchers sell up to farmers at a profit and move deeper into the forest, where land is cheaper.

The investigation showed that in recent years destruction of the rainforest has increased.

For example, between 2009 to 2019 in Mato Grosso state – which stretches over the southern part of the Amazon and grows more soya than anywhere else in Brazil – 1,180 sq km of rainforest was felled on soya farms in order to grow other crops or to provide pasture for cattle ranching. This is according to data analysed by the Brazilian NGO Instituto Centro de Vida (ICV) and shared with the investigation partners. The vast majority of this deforestation was illegal, lacking licenses under Brazil’s Forest Code.

That land area, according to the World Land Trust calculator, equates to an area nearly the size of Hong Kong.

In 2020 the UK imported more than 140,000 tonnes of soya from municipalities with at least 7 sq kms of hidden deforestation on soya farms, and about 50,000 tonnes of corn – both crops are used in the meat and dairy supply chains of major food retailers for animal feed.

According to Paul Morozzo, Senior Forest Campaigner at Greenpeace UK “Supermarkets cannot ignore the role of meat and dairy in the climate crisis. It’s time they took real action to end links to deforestation for good. That means dropping forest destroyers and reducing meat and dairy. Until they do, they may as well be handing out matches to light this years’ Amazon fires.”

Soya from the areas most at risk for this type of deforestation is regularly shipped to the UK, Spain and other European countries for use as livestock feed on factory farms by major grain traders including Bunge, which supplies soya to Spain and Cargill, a major UK supplier. Cargill’s customers include Tesco, Asda and Lidl.

The investigation established that, with trade links leading to Europe and China, certain Mato Grosso municipalities appear particularly vulnerable to this hidden deforestation. The analysis shows a strong flow of soya from these areas to the UK, suggesting that UK businesses could be turning a blind eye to deforestation in UK supply chains.

The Retail Soy Group, which represents leading retailers including Sainsbury’s, Tesco, Lidl and Waitrose, acknowledged to the Guardian newspaper that there were limitations to the moratorium and said the new allegations “further highlight the need to have strengthened legal protections of these vital ecosystems”.