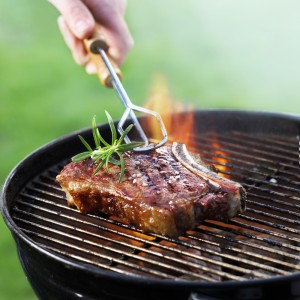 If you love barbecue but are aware of the way that high temperature cooking like grilling and barbecues can produce harmful substances in meat known as PAH’s (polycyclic aromatic hydrocarbons), salvation is at hand.

Past studies have shown an association between consumption of grilled meats and a high incidence of colorectal cancer. High levels of PAHs, which are also found in cigarette smoke and car exhaust, are associated with cancers in laboratory animals and may also explain the grilled meat/cancer connection.

It has long been known that marinating in substances that are high in antioxidants – such as herbs from the  herbs of the Lamiaceae family (basil, mint, rosemary, thyme, oregano, and sage), but also tea, wine and even a simple olive oil and lemon juice mix – can help to significantly reduce the formation of PAHs and their related compounds HCAs (heterocyclic amines).

Now researchers in Portugal, writing in the Journal of Agricultural and Food Chemistry, report that a beer marinade could have the same beneficial effect.

The researchers took samples of pork marinated for four hours in pilsner beer, non-alcoholic pilsner beer or a black beer ale, and grilled them to well-done on a charcoal grill. They also examined the free-radical scavenging activity of each of the beers in the lab.

The inhibitory effect of beer marinades on the formation of PAHs increased with the increase of the free radical-scavenging activity of the beers.

Thus black beer showed the highest effect, inhibiting the formation of PAHs by 53%, followed by the non-alcoholic pilsner (25%) and the regular pilsner (13%).

Not many people know that beer does contain various nutrients. It contains, for example, more protein and B vitamins than wine. The antioxidant content of beer has been shown to equivalent to that of wine, though the specific antioxidants are different because the starting material for beer, barley and hops, contain flavonoids different from those in the grapes used to make wine.

Apart from marinades there are other things you can do to make grilled meat less prone to PCA formation including:

Of course, advice to reduce our meat consumption – for both health and environmental benefits – is still important. But it’s good to know that it you like the occasional BBQ there is something you can do to make it just that little bit more healthy.