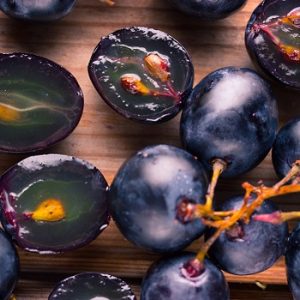 Grape extracts – a new weapon in the war against colon cancer

With this in mind a team of researchers at Pennsylvania State University in State College, set out to examine the effects of grape compounds on colon cancer stem cells.

Specifically, the researchers tested the effect of a combination of resveratrol – a polyphenolic compound found in grapes, red wine, peanuts, and some berries – and grape seed extract.

“The combination of resveratrol and grape seed extract is very effective at killing colon cancer cells,” said lead researcher Jairam K. P. Vanamala, associate professor of food sciences at the College of Agricultural Sciences, who is also a faculty member at the Penn State Hershey Cancer Institute. “And what we’re learning is the combination of these compounds is not toxic to healthy cells.”

» Colon cancer is the third most common cancer in the world and it has a relatively high mortality rate.

» US researchers have found that a combination of compounds found naturally in grapes, specifically resveratrol and grape seed extract, can reduce the incidence of colon cancer by 50% in mice and in the lab, by killing cancer stem cells.

» The combination was more effective than either substance alone and the levels used were in line doses with currently available in over-the-counter supplements. Importantly the grape extracts were not toxic to healthy cells.

Stopping colon cancer before it starts

The researchers, who reported their findings in a recent issue of BMC Complementary and Alternative Medicine, suggest that the findings, which were in mice and in laboratory tests, could pave the way for human trials. If successful, a pill containing these compounds could to help prevent colon cancer and lessen the recurrence of the disease in colon cancer survivors.

“We are particularly interested in targeting stem cells because, according to cancer stem-cell theory, cancerous tumours are driven by cancer stem cells,” said Vanamala. “Cancer stem cells are capable of self-renewal, cellular differentiation and maintain their stem cell-like characteristics even after invasion and metastasis.”

For the animal study, the researchers separated 52 mice with colon cancer tumours into three groups, including a control group and groups. The animals were fed either the grape compounds or sulindac, an anti-inflammatory drug, which was chosen because a previous study showed it significantly reduced the number of tumours in humans.

When taken separately in low doses, resveratrol and grape seed extract are not as effective against cancer stem-cell suppression as when they are combined together, according to the researchers.

The combined effect of grape seed extract and resveratrol may offer clues as to why cultures with a plant-based diet tend to have lower colon cancer rates, said Vanamala.

These diets may provide a form of natural protection against cancer prevention by providing a wide variety of beneficial compounds to target multiple pathways that cancer stem cells use to survive.

“This also connects well with a plant-based diet that is structured so that the person is getting a little bit of different types of plants, of different parts of the plant and different colours of the plant,” said Vanamala. “This seems to be beneficial for not only promoting bacterial diversity, but also preventing chronic diseases and eliminating the colon cancer stem cells.”

The link to diet

Indeed Nigeria, along with other African countries, has been shown to have the lowest cancer rates in the world which man y researchers believe is due to the traditional African diet.

A study in 2016 found that other plant based compounds found in turmeric and milk thistle were also protective against colon cancer.