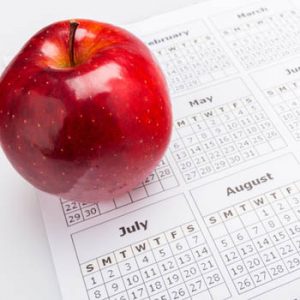 Your health can turn around very quickly if you make the right dietary choices. [Photo: Bigstock]

We hear it all the time – we are what we eat.

But two recent studies have brought home just how true that is – and how quickly we can change our lives if we change our diets.

In the first study Coop, Sweden’s largest grocery store cooperative, commissioned the Swedish Environmental Research Institute (IVL) to find out whether switching to an all-organic diet could reduce the level of pesticides found in people’s bodies

Over a two week period, the Palmberg family – parents Anette and Mats and their children Vendela, Evelina and Charlie – swapped their conventional diet for an organic one. Daily urine tests revealed that at the end of that period almost all traces of pesticides were out of their bodies.

Multiple pesticides in the body

Before the dietary intervention the family all had traces of multiple pesticides in their urine including:

» Changing your diet can significantly and quickly improve your health.

» In a 2-week US study African-Americans who switched from a Western diet to a traditional high-fire low fat African diet significantly lowered their risk of bowel cancer.

Several toxic fungicides used on fruits and vegetables and associated with a variety of effects from skin rashes/sensitivity to liver and kidney damage were also detected.

Before the experiment, eldest child Evelina’s urine was showing around 460 nanograms of chlormequat chloride per millilitre of urine (the ‘average’ that most of us carry is around 19 nanograms). Levels in children can be high because their diets can be higher in grain products –such as porridge, bread, and pasta –compared with the adult family members.  After eating only organic foods for two weeks, the chemical could not be detected in her urine.

The most profound effects were found in toddler Charlie’s samples. His chlormequat chloride levels were 675 nanograms but became undetectable by the end of the experiment. Despite his urine before the experiment showing particularly high levels of three other of the chemicals, after the experiment none of these were detected.

The way that an organic diet quickly cleared pesticides from the body is especially important for children, since children carry a higher proportion of these substances in their bodies and because their bodies are growing and changing may feel the toxic effects more profoundly.

The scientists at IVL notes in their report that this might be a good reason for following the precautionary principle, and finding safer agricultural methods for growing our food.

“Given how little we currently know about the combination effects of all the different chemical substances that people are exposed to in their day-to-day lives, it may be wise to apply a principle of caution in this regard,” they note.

In a second study, also over a two week period, African-Americans were asked to swap their Westernized diets to a traditional African high-fibre, low-fat diet. The results? They dramatically lowered their risk of colon cancer.

The key, according to the data published in published in Nature Communications is that the traditional diet has significant beneficial effects on gut flora.

Colon cancer is the fourth commonest cause of death from cancer worldwide, accounting for over 600 000 deaths per year. Colon cancer rates are much higher in the western world than in Africa or the Far East, yet in the United States, African Americans shoulder the greatest burden of the disease.

The volunteers had colonoscopy examinations before and after the diet swap. The researchers also measured biological markers that indicate colon cancer risk and studied samples of bacteria taken from the colon.

At the start, when the groups had been eating their normal diets, almost half of the American subjects had polyps – abnormal growths in the bowel lining that may be harmless but can progress to cancer.  None in the African group had these abnormalities.

In switching to a traditional African diet, which was higher in wholefoods, the 40 people who took part (20 in the US and 20 in South Africa) increased the amount of soluble fibre in the diet – from approximately 10 grams to more than 50g per day. Although eating less animal fat and proteins was also seen as helpful, this was perhaps the most beneficial change in terms of reducing cancer risk

The study found that bacteria in the gut – known as the microbiome – altered their metabolism to adapt to the new diet. In the American group, the researchers found that the African diet led to an increase in the production of butyrate, a by-product of fibre metabolism that has important anti-cancer effects.

“Studies on Japanese migrants to Hawaii have shown that it takes one generation of westernization to change their low incidence of colon cancer to the high rates observed in native Hawaiians. Our study suggests that westernization of the diet induces changes in biomarkers of colon cancer risk in the colonic mucosa within two weeks. Perhaps even more importantly, a change in diet from a westernized composition to a ‘traditional African’ high fibre low fat diet reduced these biomarkers of cancer risk within two weeks, indicating that it is likely never too late to change your diet to change your risk of colon cancer.”

And that really is the significant finding of these two studies. Whatever your age you can make significant beneficial changes in your life from changing your diet. So why not get started?

Your health can turn around very quickly if you make the right dietary choices. [Photo: Bigstock]