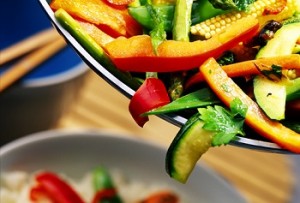 Choose the vegetarian option to lower risk of colorectal cancers

Natural Health News — Eating a vegetarian diet was associated with a lower risk of colorectal cancers compared with nonvegetarians in a new US study.

Although great attention has been paid to screening, primary prevention through lowering risk factors remains an important objective. Dietary factors have been identified as a modifiable risk factor for colorectal cancer, including red meat which is linked to increased risk and food rich in dietary fiber which is linked to reduced risk, according to the study background.

While the study highlights the health benefits of a vegetarian diet, it also shows that even if you are not completely vegetarian, making healthier dietary choices, including more healthy vegetables, pulses and fruits, eating less red meat and in particular eating more fish can bring significant health benefits.

“If such associations are causal, they may be important for primary prevention of colorectal cancers…The evidence that vegetarian diets similar to those of our study participants may be associated with a reduced risk of colorectal cancer, along with prior evidence of the potential reduced risk of obesity, hypertension, diabetes and mortality, should be considered carefully in making dietary choices and in giving dietary guidance,” the study concludes.