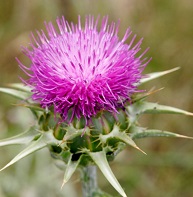 Silibinin, the active constituent in milk thistle can help reduce inflammation in the gut and may have a role to play in bowel cancer prevention

Substance in milk thistle puts the brakes on bowel cancer

Natural Health News — New research has shown that silibinin, the active constituent in milk thistle extract, can help reduce inflammation in the gut as well as halting the development and replication of bowel cancer cells.

The study was presented ahead of publication at this year’s American Association for Cancer Research (AACR) Annual Meeting.

The researchers focused on colorectal (bowel)  cancer stem cells, these cells which are self generating and thrive in conditions of inflammation.

The researchers used an animal model. Mice chemically treated to develop inflammation-dependent colorectal cancer were given either silibinin or nothing at all.

The results were clear: animals given silibinin showed less incidence of tumours indicative of colorectal cancer, whereas nearly all mice in the control group developed the disease.

In addition, in the silibinin group, the researchers saw minimal colon inflammation, and minimal incidences of rectal bleeding and rectal prolapse as frequently observed in control mice.

“Results indicate that silibinin feeding indeed provided the mice with protective effect,” says researcher Sushil Kumar, PhD,  at the University of Colorado Cancer Center and professor at the Skaggs School of Pharmacy and Pharmaceutical Sciences.

In addition to demonstrating chemopreventive benefit of silibinin, the current study adds to our understanding of how silibinin offers this benefit.

Finding a way to target them is could improve survival and quality of life of cancer patients.

CSCs both reproduce themselves (a process known as ‘self-renewal’) and produce colorectal cancer cells at a greater rate – and cells produced in these conditions are also programmed to survive at greater rates.

A key component of this expansion and survival are chemicals called interleukins (IL-4 and-6), which are essential in increasing the number of CSCs and also regulate their survival and function.

Silibinin blocks this interleukin 4/6 signalling and so decreases levels of CSC self-renewal.

“We have been following this CSC signalling back to its source and we see now that silibinin affects the signalling of colorectal cancer stem cells very near their genesis,” Kumar says.

It is notoriously difficult to gain approval for clinical trials of chemopreventive agents due to the necessity of treating many, healthy people to affect the very few who would otherwise have developed disease.

But with these positive results Kumar and his colleagues are now hopeful that they can progress on to human studies.

Other laboratory data has shown that milk thistle (Silybum marianum) may be of benefit in protecting against skin cancer.

Silibinin, the active constituent in milk thistle can help reduce inflammation in the gut and may have a role to play in bowel cancer prevention