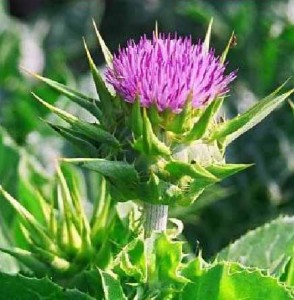 The prickly milk thistle (Silybum marianum) has been used for 2,000 years as an herbal remedy for a variety of ailments, particularly liver, kidney and gall bladder problems.

A native to the Mediterranean region, and commonly used as both food and medicine, it is now found throughout the world in dry, sunny areas. The plant gets its common name from the milky white sap that comes from the leaves when they are crushed.

Historical evidence shows that milk thistle was used extensively as far back as 2000 years ago, though it really came into its own in Germany in the 1960s with the seeds being used to cure jaundice, hepatitis, haemorrhoids, liver problems and the depression and melancholy which can be associated with them.

It has been shown to support the breakdown and metabolism of fats and proteins and can be used to increase the secretion and flow of bile from the gall bladder and as such it may also be used in all problems associated with the gall bladder. It may also offer some protection to the kidney.

Today milk thistle is mostly used for a wide range of complaints associated with liver disorders and is approved for this use by the German Commission E.

Research shows that the active group of constituents, called silymarin, is contained only in the seed shell. Supplements and tinctures are generally made from the seeds, which contain approximately 4–6% silymarin.

Silymarin is a mixture of at least seven substances, the most active of these chemicals is commonly known as silibinin. But silibinin is also comprised of the two related substances: silibinin A and silibinin B.

Silymarin is what is known as a flavanoid-lignan (flavanolignan) that is rich in antioxidants and has anti-inflammatory properties, and it may help the liver repair itself by growing new cells.

Silibinin is believed to help displace toxins that would otherwise bind to the liver as well as stimulating the liver to regenerate more quickly. It also acts as an antioxidant and helps to stabilise liver cell membranes.

The names may seem confusing but are important to some of the modern uses of milk thistle since research sometimes focuses on the use of silibinin rather than silymarin.

There are several different kinds of hepatitis – including acute and chronic viral types A, B and C as well as that which is caused by alcohol and other poisons.

While the herb seems to help protect the liver from damage and improve some symptoms, it doesn’t appear to affect levels of virus in the body. Studies into the benefits of using milk thistle are generally positive though there have been inconsistencies.

But in a recent double-blinded study researchers at the University of North Carolina found that milk thistle had no effect on people with chronic hepatitis C.

Battling the effects of alcohol

High alcohol intake has a very damaging effect on the liver and several studies suggest that milk thistle may help to keep the damage at bay and even repair it.

In 1981 a double-blind, placebo-controlled study followed 106 Finnish soldiers with alcoholic liver disease over a period of 4 weeks. The treated group showed a significant decrease in elevated liver enzymes and improvement in liver tissue health, as evaluated by biopsy in 29 subjects. Other evidence suggests similar benefits.

Evidence that the herb is not effective has tended to come from trials where the patients were allowed to keep drinking albeit at a reduced rate. Benefits are more likely to be apparent if they quit drinking altogether.

Cirrhosis of the liver is another effect of alcoholism. In 1989 a small double-blind, placebo-controlled study involving people with alcoholic or non-alcoholic cirrhosis found that in the group treated with milk thistle the 4-year survival rate was 58% as compared to only 38% in the placebo group.

Where milk thistle has really been proved to shine is helping the liver to deal with external poisons.

Evidence for instance suggests that milk thistle might protect against liver toxicity caused by pharmaceutical drugs such as acetaminophen, phenothiazines, and phenytoin.

It is also helpful where there is exposure to occupational toxins. For instance, when workers exposed to vapours from toluene and/or xylene for 5–20 years were given either a standardized milk thistle extract (80% silymarin) or placebo for 30 days, there were significant improvement in liver function tests and blood platelet counts compared to those given a placebo group.

When injected intravenously, silibinin is thought to act as an antidote to poisoning by the deathcap mushroom (Amanita phalloides). In one trial the researchers examined 30 different treatments used in 205 cases of Amanita phalloides mushroom poisoning.

Both penicillin and hyperbaric oxygen independently contributed to a higher rate of survival. However, when silibinin was added to the penicillin treatment, survival was increased even more.

The key to avoiding severe liver damage in this type of poisoning say researchers is to administer silibinin within 48 hours of mushroom intake.

Animal studies suggest that silymarin could be effective in the treatment of diabetic nephropathy. It has also been found to be effective in reducing protein in the urine (proteinuria) in type-2 diabetics. Proteinuria is a significant risk factor for both kidney disease and for cardiovascular disease and death. Milk thistle seems to reduce proteinuria via the antioxidant and anti-inflammatory effects of silymarin.

Some early laboratory studies suggest that silymarin and other active substances in milk thistle may have anticancer effects. These substances appear to reduce blood supply to tumours and stop cancer cells from dividing and reproducing, thus shortening their lifespan.

In a 2010 study involving 50 children, milk thistle was seen to reduce the liver damaging effects of chemotherapy.

There is evidence also that silymarin can protect against both skin and prostate cancer and some studies even suggest that silibinin, added to SPF formulas may have an additive effect in terms of sunscreen protection and may help reduce the risk of skin cancer.

And a nutritious food

Milk thistle can be eaten as food – indeed many of the herbs we consider medicinal are also excellent sources of nutrition.

In the Middle Ages all parts of the plant were eaten, though today we tend to just use the seeds for food. Nevertheless, the roots can be eaten raw or boiled and buttered or par-boiled and roasted. The peeled stems can be soaked overnight to remove bitterness and then stewed. The leaves can be trimmed of prickles and boiled and make a good spinach substitute or they can also be added raw to salads. The roasted seeds were traditionally used to make a coffee-like drink and eating the seeds is still a good way to get the benefit of this unique herb.

The young shoots in spring can be cut down to the root and boiled and buttered, more recently milk thistle sprouts have been found to be a rich source of dietary antioxidants.

Use it while you still can?

Milk thistle has traditionally been used as both a food and a supplement. Confusion reigns, however, as our colleagues at the Alliance for Natural Health Europe have recently reported, since the implementation of the Traditional Herbal Medicinal Products Directive (THMPD) about how milk thistle should be classified.

Several EU Member States are in the process of trying to remove milk thistle from the shelves of health food stores, as well as from sale on the Internet and even from prescription by practitioners.

The Swedish Food Agency (Livsmedelsverket); has recently taken milk thistle (the food supplement) off the market having bent to the Swedish Medical Products Agency’s (Läkemedelsverket) view that it is strictly a medicinal product. Licensed products made from alcoholic extracts, however are still available.

Some companies in the UK have also been challenged by the Medicines and Healthcare products Regulatory Agency (MHRA), the UK drugs regulator, and had their milk thistle products declared unlicensed drugs, forcing them off the market.

Should this action become widespread consumer choice around how to use milk thistle will be dramatically reduced.

Choose a high quality herbal extract, preferably made from fresh wild crafted herb. An optimal dose has not been established, though most preparations are standardised to contain 70-80% of silymarin.  Aim for a total of  between 200 and 400 mg silymarin a day, divided into three daily doses.

Tinctures are easily absorbed and in the early half of last century homoeopaths got good results by giving very low dosages – 4-6 drops of mother (herbal) tinctures in a little water – twice daily.

Herbalists, on the other hand, tend to give much higher dosages – 20-30 drops (and more) in a little water 2-3 times daily. If you are unsure it is best to discuss dosage with a qualified practitioner.

Or you can simply eat the seeds – perhaps the most usual way to incorporate milk thistle into your daily routine. Fresh seeds can be eaten much like sunflower or pumpkin seeds sprinkled on salads or ground as needed to incorporate into bread or smoothie recipes.

Milk thistle has a very low toxicity, though on rare occasions it can produce abdominal discomfort.

On the basis of its extensive use as a food, milk thistle is believed to be safe for pregnant or nursing women Indeed its use during pregnancy has been studied and it is a traditional remedy to promote and increase a woman’s milk supply. Nevertheless, if you are pregnant, do always consult your practitioner about its safe use.