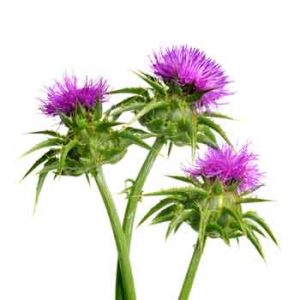 In a new study silymarin, derived from milk thistle, was found to have anti-cancer properties. [Photo: Bigstock]

Natural Health News — New evidence suggests that constituents of turmeric and milk thistle may be protective against colon cancer.

Previous studies have reported a link between diet and this form of cancer. Similarly, phytochemicals found in fruits, vegetables and spices have been found in to have a protective effect.

A new laboratory study published in the Journal of Cancer has suggested that combining curcumin and silymarin can inhibit the spread of colon cancer cells and increase cancer cell death.

Curcumin is the active ingredient in the spice turmeric, which is present in spicy curry dishes, and silymarin is a component of milk thistle, which has been used to treat liver disease.

» A recent laboratory study of silymarin and curcumin, derived from milk thistle and turmeric respectively, could halt the growth and spread of colon cancer cells.

» The results showed that the two worked best in combination and that positive results could be seen at very low levels of exposure in the lab.

The researchers treated human colon cancer cell lines with curcumin alone, silymarin alone or a combination of curcumin and silymarin.  They then assessed cell proliferation, the process that results in an increase of the number of cells.

The researchers found treating the cells initially with curcumin, then with silymarin was more effective in fighting cancer than treating the cells with either phytochemical alone, said Uthayashanker Ezekiel, Ph.D., corresponding author and associate professor of biomedical laboratory science at Saint Louis University.

“The combination of phytochemicals inhibited colon cancer cells from multiplying and spreading. In addition, when the colon cancer cells were pre-exposed to curcumin and then treated with silymarin, the cells underwent a high amount of cell death,” Ezekiel said.

“Phytochemicals may offer alternate therapeutic approaches to cancer treatments and avoid toxicity problems and side effects that chemotherapy can cause.”

Ezekiel noted that while the research is preliminary he saw promise in using the phytochemicals to help prevent colon cancer, which frequently is caused by lifestyle factors, such as diet.

“We still have much to learn” said Ezekial and he cautioned against ‘mega-dosing’ with supplements, suggesting that, “For now, it’s so much safer to add a little spice to your diet and get your curcumin from foods that contain turmeric, such as curry, rather than taking high doses of the compound.”

In a new study silymarin, derived from milk thistle, was found to have anti-cancer properties. [Photo: Bigstock]