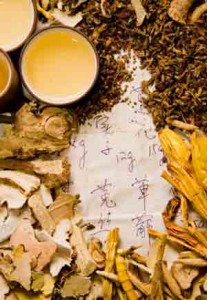 Experts from Cardiff University’s School of Medicine have joined forces with Peking University in China to test the health benefits of a traditional Chinese medicine known as Yangzheng xiaoji.

Yangzheng xiaoji is a combination formula consisting of 14 herbs among them astragalus, ginseng, the ganoderma mushroom and  turmeric. It is traditionally used, among other things, as an immune stimulant and in laboratory studies has shown some initial promise as a cancer treatment – however, until now how it works has remained unknown.

The team also set-out to find out more by seeing if combining it with more modern treatments like chemotherapy could improve patient outcomes and potentially lead to the development of new cancer treatments and therapies.

“Although there have been a few successes, most of the traditional remedies are short of scientific explanation which has inevitably led to scepticism – especially amongst traditionalists in the West. As a result, we set out to test the success of a Chinese medicine and then consider how combining it alongside traditional methods like Chemotherapy could result in positive outcome for patients.”

Since 2012 the team have investigated how the formula works, discovering that it blocks a pathway which stops the spread of cancer cells in the body.

“The formula has been shown to be beneficial to patients with certain solid tumours, when used alone and in conventional therapies, such as chemotherapy.” says Professor Wen Jiang. “It suggests that combining the formula with conventional as well as new therapies could hold the key to developing new treatments for cancer patients.

He adds that the team are already looking to clinical trials in treatment of lung and other cancer types.