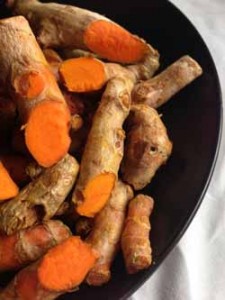 Turmeric – from the kitchen to the clinic

Turmeric is barely out of the news these days – but is it really the miracle cure-all it promises to be? The answer could be yes.

Turmeric (Curcuma longa), a perennial herb, is a member of the ginger (Zingiberaceae) family. The plant grows to a height of three to five feet, and is cultivated extensively in Asia, India, China, and other countries with a tropical climate.

It has oblong, pointed leaves and produces funnel-shaped yellow flowers. But it is the root of the plant that is used in cooking and medicinally usually as turmeric powder.

Turmeric is used extensively in foods for both its flavour and colour. It gives curry powder its characteristic yellow colour and has a long tradition of use in both Chinese and Ayurvedic medicine, for the treatment of flatulence, jaundice, menstrual difficulties, haematuria, haemorrhage, and colic. It can also be applied topically in poultices to relieve pain and inflammation.

Due to its brilliant colour, turmeric has also been traditionally employed as a dye not only to colour foods but cosmetics, paper, wood, and fabrics (including the golden robes worn by Thai Buddhist monks) as well.

While human studies are few, laboratory and animal studies suggest that turmeric and curcumin have real therapeutic benefits.

Current research has focused mainly on turmeric’s antioxidant, anti-inflammatory and anticancer properties in addition to its use in cardiovascular disease and gastrointestinal disorders.

Indeed it’s antioxidant and anti-inflammatory properties that may be the reason why is has so many theraprutic uses. These properties are widely thought to come from curcumin, the main polyphenol found in turmeric.

Curcumin is also a powerful antioxidant, comparable to vitamins C and E. Antioxidants scavenge molecules in the body known as free radicals, which if left to build up can damage cell membranes and DNA, and even cause cell death. Antioxidants help fight free radicals and may reduce or even help prevent some of the damage they cause.

It is also a powerful anti-inflammatory that acts to relive pain and inflammation in a similar way to COX-2 inhibitors, which are a type of non-steroidal anti-inflammatory drug (NSAID), though without the same risk of cardiovascular adverse effects.

There is, for example, some evidence that an Ayurvedic formula combining turmeric, winter cherry (Withinia somnifera), boswellia (Boswellia serrata), and zinc had less pain and disability in patients with osteoarthritis. It’s difficult to know however if the pain relief was from the turmeric alone or the combination of ingredients.

Curcumin stimulates the production of bile by the gallbladder, which may help improve digestion. The German Commission E, which determines which herbs can be safely prescribed in Germany, has approved turmeric for digestive problems. One double-blind, placebo-controlled study found that turmeric reduced symptoms of bloating and gas in people suffering from indigestion.

Curcumin may also be useful in the treatment of inflammatory bowel disease which includes ulcerative colitis (UC) and Crohn’s disease. In one double-blind, placebo-controlled study, people whose ulcerative colitis was in remission took either curcumin or placebo, along with conventional medical treatment, for 6 months. The relapse rate for those taking curcumin was much lower than for those who took placebo, leading the researchers to conclude that curcumin was a “promising and safe medication for maintaining remission” in those with UC.

There is also evidence form human trials that turmeric could help heal gastric ulcers. In a trial involving 45 patients with endoscopically-diagnosed gastric ulcer, 25 were given 600 mg powdered turmeric five times daily. After four weeks, ulcers had completely healed in 48% these patients. The success rate increased over time, with 76% being ulcer free after 12 weeks of treatment.

There has been a great deal of research on turmeric’s anti-cancer properties. Scientific review suggest that curcumin has potential as an anti-cancer treatment and numerous animal, in vitro , and in vivo studies have demonstrated the anti-carcinogenic effects of turmeric and its flavonoid component curcumin against colon, breast and prostate cancers, as well as melanoma.

Early studies suggested that turmeric may help prevent atherosclerosis, the build-up of plaque that can block arteries and lead to heart attack or stroke. Because it stops platelets from clumping together, turmeric may also prevent blood clots from building up along the walls of arteries.

In one animal study, an extract of turmeric lowered cholesterol levels and kept LDL “bad” cholesterol from building up in blood vessels.

But a double-blind, placebo-controlled human study found that taking curcumin, the active ingredient in turmeric, at a dose of up to 4g per day did not improve cholesterol levels.

A preliminary study suggests curcumin may help treat uveitis, an inflammation of the eye’s iris. In one study of 32 people with chronic anterior uveitis, curcumin was effective as corticosteroids, the type of medication usually prescribed. A larger and longer term study found that curcumin helped prevent relapse of the disease.

Test tube and animal studies suggest numerous promising benefits of curcumin. It may, for example, help to protect the liver and kidneys from chemical and environmental toxins.

Laboratory studies, for instance, show it may have antibacterial and antiviral properties; though it has not been shown to be useful against HIV. Other studies have found that it can boost immunity and strengthen and stabilise cell membranes increasing cells’ resistance to infection by disease-causing microbes.

Curcumin has also shown promise treating diabetes. It has been shown to improve insulin secretion in healthy people and delay the development of type-2 diabetes in those at risk. It may also be useful in healing psoriasis  and respiratory infections. In fact in central Vietnam slices of candied turmeric are eaten to alleviate coughing and sore throat.

And skin benefits too

There is evidence that turmeric extract enhance skin hydration when compared to conventional creams. Sebum production, which can keep the skin looking young and unblemished, was enhanced as well.

Used externally there is also evidence that curcumin provides protection against the  damage caused by UVB radiation the rays responsible for sunburn. It may also have uses for wound healing.

How to use turmeric

You can, during some parts of the year buy fresh turmeric root, but is usually sold dried and/or ground, in powder form.

Use it in your cooking to add bright colour and subtle, earthy flavour to everyday dishes; not just for curries but in dhals, pilafs as well as in many North African inspired meat and vegetable dishes as well as in chutneys and pickles (such as piccalilli).

Buy the fresh root when you can and freeze for later use.

Try making a medicinal tea by steeping 1 tbl each of crushed ginger root and crushed turmeric root and a very few crushed black peppercorns in 175 ml (6 oz) hot water. As a variation you could add 1 tbl lemongrass for flavour and/or brew with green tea leaves to further boost the antioxidant value. If using the dried herbs reduce the amounts to 1 tsp each.

Black pepper, or more specifically piperine in black pepper, works synergistically with turmeric to increase the bioavailability of curcumin by as much as 2000%.

Turmeric is also available as supplements (usually a powder in capsules, but also in tablets). Look for products standardized for 95% curcuminoids and aim to take 400 to 600 mg of turmeric extract 3 times per day, or as per the dosage instructions on the pack.

Look also for supplements that contain black pepper extract or piperine to ensure the highest bioavailability of the curcumin.

Don’t use turmeric if you have gallstones or bile duct dysfunction. Pregnant women shouldn’t use it without their doctors’ approval. In rare cases, extended use can cause stomach upset or heartburn. As always, consult your practitioner if you have question or need more information.