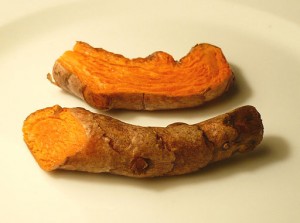 Turmeric root, a basic ingredient of curry powder, has a range of medicinal properties including boosting immunity and acting as an anti-inflammatory [Image: Badagnani - Wikimedia Commons]

Natural Health News — Curry dishes, made with spices like turmeric, have been eaten for centuries, and according to a new study have surprising medicinal qualities.

Now US researchers have discovered that curcumin, a compound found in the cooking spice turmeric, can cause a modest but measurable increase in levels of a protein that’s known to be important in the “innate” immune system, helping to prevent infection in humans and other animals.

The protein, known as cathelicidin antimicrobial peptide, or CAMP, is part of what helps our immune system fight off various bacteria, viruses or fungi even though they hadn’t been encountered before.

Prior to this, it was known that CAMP levels were increased by vitamin D. Discovery of an alternative mechanism to influence or raise CAMP levels is of scientific interest and could open new research avenues in nutrition and pharmacology, scientists said.

The CAMP peptide is the only known antimicrobial peptide of its type in humans, researchers said. It appears to have the ability to kill a broad range of bacteria, including those that cause tuberculosis and protect against the development of sepsis.

The newest findings which showed that curcumin caused CAMP levels to almost triple were made by researchers in the Linus Pauling Institute at Oregon State University and published today in the Journal of Nutritional Biochemistry, in collaboration with scientists from the University of Copenhagen in Denmark. The work was supported by the National Institutes of Health.

“This research points to a new avenue for regulating CAMP gene expression,” said Adrian Gombart, an associate professor of biochemistry and biophysics in the Linus Pauling Institute. “It’s interesting and somewhat surprising that curcumin can do that, and could provide another tool to develop medical therapies.”

Protects the gut as part of the diet

The impact of curcumin in this role is not nearly as potent as that of vitamin D, said Adrian Gombart, an associate professor of biochemistry and biophysics in the Linus Pauling Institute, but could nonetheless have physiologic value. Curcumin has also been studied for its anti-inflammatory and antioxidant properties.

“Curcumin, as part of turmeric, is generally consumed in the diet at fairly low levels,” he said. “However, it’s possible that sustained consumption over time may be healthy and help protect against infection, especially in the stomach and intestinal tract.”

There has been intense scientific interest in the vitamin D receptor in recent years because of potential therapeutic benefits in treating infection, cancer, psoriasis and other diseases, the researchers noted in their report. An alternative way to elicit a related biological response could be significant and merits additional research, they said.

Turmeric is a pungent, orange-yellow spice and an important ingredient in many curries, commonly found in Indian, South Asian and Middle Eastern cuisine. It has also been used for 2,500 years as a medicinal compound in the Ayurvedic system of medicine in India – not to mention being part of some religious and wedding ceremonies.

Turmeric, revered in India as “holy powder”, is a member of the ginger family and a native to south Asia.  It has anit-imflammatory properties and its potential use in Alzheimer’s, arthritis and other disorders is also being investigated around the world.

In one 2009 study its curcumin compound was found to strengthen and stabilise cell membranes increasing cells’ resistance to infection by disease-causing microbes. Laboratory studies have also shown that curcumin has potential in treating bowel and prostate and ovarian cancers.

Turmeric root, a basic ingredient of curry powder, has a range of medicinal properties including boosting immunity and acting as an anti-inflammatory [Image: Badagnani - Wikimedia Commons]