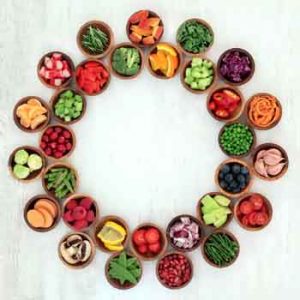 In the EU several health claims are allowed on food for antioxidants. [Photo: Bigstock]

A – Antioxidants came to public attention in the 1990s, when scientists began to understand that free radical damage was involved in the early stages of artery-clogging atherosclerosis and may contribute to cancer, vision loss, and a host of other chronic conditions.

Some studies showed that people with low intakes of antioxidant-rich fruits and vegetables were at greater risk for developing these chronic conditions than were people who ate plenty of these fruits and vegetables. Clinical trials began testing the impact of single substances, especially beta-carotene and vitamin E, as weapons against heart disease, cancer, and the like.

As with and new nutritional discoveries what followed was a whirlwind of media about the benefits of antioxidants and lagging a bit behind that the research into antioxidants began in earnest.

Some trials have been positive and some have been negative or inconclusive.

Studies show that, overall, those whose diets give them the highest levels of anti-oxidant rich whole foods are at lower risk of all kinds of diseases including cancer.

But the data is not straightforward. In the long-term Physicians’ Health Study, cancer rates were similar among men taking beta-carotene and among those taking a placebo. Other trials have also largely showed no effect. But other studies show that in some cases there is an increased risk of cancer and cancer deaths.

But equally there is evidence of protection. One large trial showed a reduction in cancer risk and all-cause mortality among men taking an antioxidant cocktail but no apparent effect in women. This may be because the men tended to have low blood levels of beta-carotene and other vitamins at the beginning of the study.

A randomised trial of selenium in people with skin cancer demonstrated significant reductions in cancer and cancer mortality at various sites, including colon, lung, and prostate. Again the effects were strongest among those with low selenium levels at baseline.

But it’s important to remember that science is not a static thing. Very often things we thought were true often end up ‘proven’ to be wrong as the science evolves. For more on this see our article: Can antioxidants be killers?

One way to understand where the strongest evidence lies is to look at what health claims are allowed by law.

In 2007 the European Commission expressly described the term antioxidant as a health claim, which under EU law must be certified by the European Food Safety Authority (EFSA) to avoid misleading consumers.

According to the 2007 claims guidance for in the EU:

“A claim is a health claim if in the naming of the substance or category of substances, there is a description or indication of a functionality or an implied effect on health, Examples: ‘contains antioxidants’ (the function is an antioxidant effect); ‘contains probiotics/prebiotics’ (the reference to probiotic/prebiotic implies a health benefit)…”

There are 8 permitted claims for antioxidant substances in food products:

But, of course, each EU Member State has put its own interpretation on what this means.  In the UK PepsiCo famously was denied the right to make this health claim for it’s Naked Juice, which said “Juice Smoothies loaded with nature’s elite fighting force to defend your body against free radicals (those nasty little molecules that attack your cells and could have an impact on your overall health)”.

But in Italy, where companies and consumers are more botanically aware the ministry of health lists 157 plants – many of which go beyond the EU list – for which an antioxidant health claim is permitted.

There is no laws or specific guidance on claims for antioxidants in cosmetics. In Europe, as elsewhere, there is an increasing interest among consumers for natural ingredients in their cosmetics and antioxidants are particularly popular in anti-ageing and suncare products as a way of helping to prevent or minimise damage from environmental exposures such as sun and pollution.

When used in cosmetics antioxidants play multiple roles. For instance, they are natural preservatives that help stop colour changes in the product and prevent it from going rancid. For many conventional brands this can lead to label confusion. A product may, for instance, advertise its vitamin E content as a ‘skin vitamin’ when, in fact, its primary function the product is as an antioxidant (and it is therefore present in minute amounts that are unlikely to benefit skin).

Plant extracts are a popular way of adding useful quantities of beneficial antioxidants to beauty products and certified organic products are perhaps the best way to ensure that you are getting the quantity and quality of antioxidants that you want.

Organic ingredients have been shown to contain higher levels of natural antioxidants which help to defend against free-radical damage caused by stress, environmental pollutants and the sun. There is also evidence that they can protect both collagen and elastin, the structural proteins of the skin, necessary for a healthy, smooth complexion.

Neal’s Yard Remedies has been very active in researching the effectiveness of natural and organic ingredients. In collaboration with experts at London’s Kingston University our research has shown that that ingredients such as white tea, witch hazel and rose possess potential health and beauty properties which are just too important to ignore, including very potent anti-inflammatory and anti-oxidant activity on skin cells.

We have also collaborated in published research into the antimicrobial properties of essential oils and because we know they are so effective we choose to be organic because we want our customers to have all the benefits, with none of the unnecessary – or even harmful – ingredients found in conventional brands.

From the inside out

High antioxidants foods can clearly help in the prevention of disease, but in combination with a good skincare routine and clean products that avoid harsh chemicals, they can also help keep you looking good on the outside as well. For instance:

If you want to protect your skin by incorporating more antioxidants in to your diet check out our articles Skin foods – eat your way to beautiful skin and The best foods to protect your summer skin.

In the EU several health claims are allowed on food for antioxidants. [Photo: Bigstock]