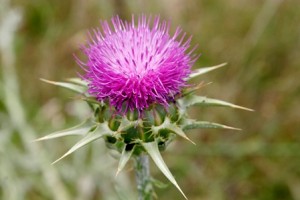 Natural Health News — The active constituent of the herb milk thistle, silibinin, could hold the key to ehlping those with a rare form of cancer known as Cushing Disease

Cushing Disease, not to be confused with Cushing’s Syndrome, is caused by a tumour in the pituitary gland in the brain. The tumour secrets increased amounts of the stress hormone adrenocorticotropin (ACTH) followed by cortisol release from the adrenal glands. This lead to symptoms such as rapid weight gain, elevated blood pressure and muscular weakness.

Sufferers are also prone to osteoporosis and infections and may show cognitive dysfunction or even depression. Compared to humans, of which only 5.5 in 100,000 people worldwide develop Cushing Disease, this condition is very common in several pets. For example, 4 % of dogs and even 7 % of horses suffer from Cushing Disease.

In up to 85% of people the tumour can be removed by uncomfortable brain surgery. For inoperable cases, there is currently only one targeted therapy approved which unfortunately causes intense side effects such as hyperglycemia in more than 20% of the patients.

Now scientists at the Max Planck Institute of Psychiatry in Munich have discovered in cell cultures, animal models and human tumour tissue that a harmless plant extract can be applied to treat Cushing Disease.

“Silibinin is the major active constituent of milk thistle seeds. It has an outstanding safety profile in humans and is already used for the treatment of liver disease and poisoning,” explains Marcelo Paez-Pereda, leadauthor of the study published in Nature Medicine. After silibinin treatment, tumour cells resumed normal ACTH production, tumour growth slowed down and symptoms of Cushing Disease disappeared in mice.

“We knew that Cushing Disease is caused by the release of too much ACTH. So we asked ourselves what causes this over production and how to stop it,” says Paez-Pereda.

In their first experiments the researchers found tremendously high amounts of the heat shock protein 90 (HSP90) in tumour tissue from patients with Cushing Disease. In normal amounts HSP90 can help inhibits the production of ACTH.

Says Paez-Pereda:”With silibinin we might have discovered a non-invasive treatment strategy not only for the rare Cushing Disease but also for other conditions with the involvement of glucocorticoid receptors such as lung tumours, acute lymphoblastic leukemia or multiple myeloma.”