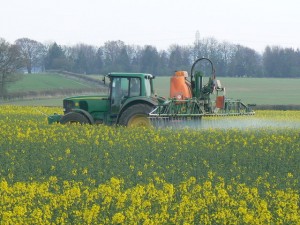 Five a day without pesticides

Doctors tell us, nutritionists tell us and these days almost everyone knows that eating five portions of fruit and vegetables a day is important for good health.

However government figures reveal that a large proportion of fruit and vegetables sold in this country contain significant levels of pesticide residues.

So what does this mean?

We  have studied the Pesticide Residue Committee’s (PRC) published test results for 46 types of fruit and vegetables commonly found in the UK’s shopping baskets. We discovered that 43 of them contained pesticide residues, 41 contained multiple residues and 21 had residues over the permitted maximum residue level (MRL) and should not have been on sale- after all these substances are designed to kill living organisms.(1)

Research shows that pesticides do matter…

Government agencies and some nutritionists dismiss any concerns about pesticides. They argue that getting “five a day” is all important.  But evidence is mounting that we should be concerned and that we should be avoiding pesticide residues.

For decades research from North America has repeatedly drawn attention to the links between pesticides and ill-health.(2)

In this country a Royal Commission in 2005 declared that it was “unimpressed by the arrangements for monitoring human health” because too few UK studies had looked “at possible associations between pesticides and serious diseases such as cancer and degenerative neurological disease”.(3)

In 2009, after surveying pesticide-related illness found in Britain’s primary care system, researchers in public health and medical statistics  highlighted that pesticides and related chemicals include “mutagenic substances, carcinogens or probable carcinogens, endocrine disrupters, reproductive toxic and neurotoxic substances”  which have “undoubted acute health effects”. They also pointed out that “much less is known about the incidence of ill-health due to low-levels of pesticide exposure”.(4)

Pesticides in the diets of infants and children

Of course, pesticides are used and found in all aspects of modern life including in our homes but as long ago as 1993 the United States National Research Council published a report, “Pesticides in the Diets of Infants and Children” which drew attention to concerns about residues in foods.(5) Since then UK researchers have reiterated and highlighted the risks including the point that potentially harmful dietary exposure to pesticides is not limited to special cases or specific groups but can encompass “normal” eating patterns.(6,7)

According to the US Environmental Working Group (EWG) there is now mounting evidence that small and even trace amounts of pesticides along with other chemicals can cause lasting damage to human health, especially during foetal development and early childhood.(8)

The Organic Center in the US has highlighted recent research evidence of these risks(9) which include: developmental problems in infants and children(10) and especially cognitive deficits,(11, 12, 13, 14, 15) asthma,(16) increased risk of overweight(17) and diabetes.(18,19)

Denial has become a way of life

Despite all this, government agencies – the Pesticide Residue Committee (PRC) and the Food Standards Agency (FSA) in the UK and the European Food Standards Authority (EFSA) – maintain that pesticide residues in food pose no health risk! In the UK the PRC’s monitoring programme checks residues in food against Maximum Permitted Residue Levels (MRLs), a safety level for single exposure (Acute Reference Dose, or ARfD) and a safety level for exposure over lifetime (Acceptable Daily Intake or ADI) which, it is argued, ensures that exposure to residues in foods stays within a safe limit.(20)

We believe the monitoring programme is inadequate.

It doesn’t look at enough products nor often enough; there are no penalties for breaching Maximum Residue Levels and far too many cases where they are breached; cases where single or lifetime exposure safety levels are reached or even exceeded are summarily dismissed with the explanation that they are within “built in safety margins”.

We think this is too lax. We also feel that there is a dearth of information about the impact of exposure levels on sensitive individuals (as distinct from groups), inadequate knowledge and consideration of the interactions of multiple residues – the cocktail effect – in individual foods or diets, and limited knowledge about the impacts of long term low level pesticide exposure in a world with increasing levels of environmental contamination.

Added to which the pesticide and food safety regulatory authorities seem remarkably dilatory or reluctant to consider and take into account any new questions or research about the health risks of pesticide residues. It seems that denial at any cost is the order of the day.

All of this means that we cannot trust their judgement. In our view, there is enough evidence that pesticide residues in food pose such a health risk – certainly for pregnant women, infants, children, to some individuals but possibly more generally – we should all take the precaution of avoiding them where we can.

We think there are plenty of people who share our view and want to know what they can do to avoid or minimise their intake of pesticide residues in food.

The headline answer is to eat organic food whenever possible.

Although organic certification does not absolutely guarantee pesticide free food, almost all of it is. In 2009 and 2010 more than 96% of organic foods tested by the PRC were free of pesticide.(1) There is also research evidence which demonstrates that an organic diet significantly reduces children’s bodily pesticide load.(21, 22)

Organic food is better for us

Many types of organic foods tend to contain more nutritionally desirable components such as dry matter, vitamins, minerals, antioxidants, omega 3 than comparable conventional foods where the emphasis has been on quantity rather than quality.(23, 24) Some researchers question the degree to which this is the case and whether it matters to health;(25) but it seems to us to be a “no brainer” to go for the food that is likely to contain more desirable components and less undesirable ones – such as pesticide residues.

Helping you reduce your pesticide burden from non-organic food

Unfortunately organic food is not always available to all shoppers and sometimes its price is daunting. For this reason we have produced some simple to use charts of fruit and vegetables that are on sale in UK shops according to the amount of pesticide residue contamination found the PRC and recorded in their yearly reports.(1)

Worryingly, we found that they were way over 12 in that category and so we’ve called it “The Red List”.

Unfortunately many fruits such as apples, pears and strawberries are on this list because supermarkets demand they look ‘perfect’ – thus they get more pesticides.

We’ve put in the second category those products we didn’t feel comfortable about giving a clean bill of health. These are where over 25% of the samples contain pesticides and some contain multiple residues.

Finally we have the “green and clean category” where residue levels range from zero to 25%.

Washing fruit and vegetables can reduce potential exposure to some types of pesticide residues and so can peeling them – but that can also mean reducing nutritional value.

Sometimes healthy and environmental shopping seems like an impenetrable jungle. We hope that this information will help you navigate the pesticide pitfalls when you are buying your five-a-day fruit and vegetables.

The best way to avoid pesticide residues is to grow your own and buy organic, but if that’s not possible choose firstly from the “Green & Clean List” and then from “The Amber List”.

We realise that it is not possible to completely avoid the fruit and vegetables that are on “The Red List” but by limiting what you buy from that list as much as you can, you will reduce you and your family’s exposure to pesticide residues – and can anyone really deny that’s a good thing?