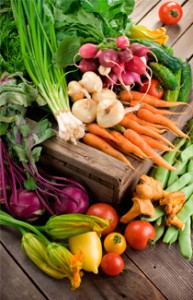 The analysis – the largest of its kind to date – published in the British Journal of Nutrition – looked at fresh vegetables, fruit and cereals (as well as some pre-prepared foods such as baby food as well as wine and seed oils) in order to determine what nutritional differences, if any, there might be.

According to study the most striking differences revealed in the study are: higher concentrations of antioxidants and less frequent presence of pesticide residues in organic crops compared with non-organic.

Based on 343 peer-reviewed publications solely focusing on organic crops, fruit and vegetables, the Newcastle University scientists found that with greater nutrient and antioxidant density, every mouthful of fruit and vegetables produced organically can count for more.

On average organic produce had between 18% and 69% more antioxidant compounds.  Smaller, but still statistically significant, composition differences were also detected for a number of carotenoids and vitamins.

A switch to eating organic fruit, vegetable and cereals (and foods made from them), they say, would lead to a 20–40% (and for some compounds up to a 60%) increase in crop-based antioxidant and polyphenolic consumption without any increase in calories.

They noted that, in particular, there is increasing evidence that higher levels of manufactured chemical fertilisers, most notably the nitrogen and phosphate-based fertilisers that are prohibited or heavily restricted by organic farming standards, leads to substantially lower concentrations of antioxidants in conventional crops.

Previous research has shown that organic dairy products are higher in beneficial fats than conventional ones.

Likewise organic farming prohibits the use of synthetic chemical pesticides, and promotes the use of balanced crop nutrition, crop rotation and mechanical, biological and cultural methods for weed, pest and disease control.

This explained the much lower incidence of pesticide contamination in organic compared to conventional crops found in the study. In fact, the level of detectable pesticides was four times higher in conventional than organic crops.

Conventionally grown fruit had by far the highest frequency of pesticide residues, about seven times higher than in organic fruit. In conventional vegetables and crop-based processed foods the frequency of pesticide residues was three to four times higher than in organic. All organic crop types were found to have similarly low contamination rates.

The understanding that they contain lower levels of pesticides is already a key factor motivating some consumers to choose organic foods, making this further information useful for consumer choice.

Amongst its other findings the study, funded jointly by the European Framework 6 programme and the Sheepdrove Trust, also found that cadmium, which is one of only three metal contaminants along with lead and mercury for which the European Commission has set maximum permitted contamination levels in food, was found to be almost 50% lower in organic crops than those conventionally-grown.

Peter Kindersley, of the Sheepdrove Trust notes:  “Given the last 50 years of chemical intensive industrial farming which has contaminated our soils and water, hugely diminished our countrysides biodiversity including birds, bees and butterflies, it should come as no surprise that the quality of our food and ultimately our health have been similarly compromised.”

According to Carlo Leifert, professor of ecological agriculture at Newcastle University who led the study, : “The organic versus non-organic debate has rumbled on for decades now but the evidence from this study is overwhelming – that organic food is high in antioxidants and lower in toxic metals and pesticides.

“This demonstrates that choosing food produced according to organic standards can lead to increased intake of nutritionally desirable antioxidants and reduced exposure to toxic heavy metals.

“This constitutes an important addition to the information currently available to consumers which until now has been confusing and in many cases is conflicting.”

Helen Browning, Chief Executive of the Soil Association, the UK’s leading organic certification organisation adds: ‘The crucially important thing about this research is that it shatters the myth that how we farm does not affect the quality of the food we eat’.