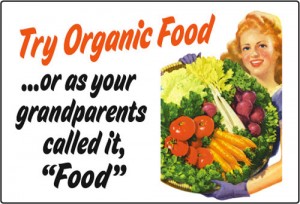 Eating an organic diet can reduce pesticide levels, as measured in your urine

The best way to reduce your pesticide intake? Eat organic!

In a toxic world how do you even begin to reduce your exposure to harmful chemicals?

There are so many things we don’t have control over. Traffic pollution, electromagnetic pollution, and water pollution are big ones. But diet us something we can all control and an amazing new study has shown that if you want to avoid pesticides not only is eating organic your best choice, it can work really quickly to help your body detox.

Some believe that ‘on the basis of the precautionary principle alone, choosing organic food appears to be an entirely rational decision’.

In a study published in the journal Environmental Research, 13 adults were randomly allocated to consume a diet composed of at least 80% organic or conventional food for seven days and then switched to the alternate non-organic diet for a further week.

The small study is the first of its kind that compares diets in adults; past research only looking at children. And those too have shown impressive results.

The children consumed their usual conventional diet with an organic intervention phase for five consecutive days, at which time organic food items were substituted for most of the children’s conventional diet (fruit, vegetables, juice, wheat and corn products).

“Recent studies have raised concerns for the health effects of these chemicals even at relatively low levels.

“Our results show that people who switch to eating mainly organic food for just one week can dramatically reduce their exposure to pesticides, demonstrating that an organic diet has a key role to play in a precautionary approach to reducing pesticide exposure.

“While the clinical relevance of reducing pesticide exposure requires further studies conducted on a larger scale, this study is an important first step in expanding our understanding about the impact of an organic diet.”

In 2003 another study reported that children who consumed organic fruit, vegetables and juice had a mean total urinary dimethyl alkylphosphate metabolite (DMAP) concentration (a non-specific measure of OP exposure) that was approximately 9 times lower than children consuming conventional foods.

It’s not certain whether this reduction was because of the increased levels of omega-3 fatty acids and conjugated linoleic acid in organic compared to conventional milk or the likely reduction in pesticide – or both.

We are, obviously exposed to pesticides in many places, in our gardens, parks, workplaces, and in cars, buses, trains and on public walkways. Studies show that levels in our food are also rising. And while it can feel like we are helpless, what the results of these studies show are that we are not helpless, what is more we can get quick health gains, simply by choosing better quality and pesticide-free food.

If you want to make the switch to organic there is a wide world of choice out there. Of course you can find organic tea and coffee and even chocolate – you can even find organic crisps. But if you want to make real difference to your diet and overall health make your priority those foods that you know you are going to consume in quantity such as dairy products and fresh fruit and veg. In many places these are competitively priced. And if you shoo locally and at farmer’s markets – or have an organic food box delivered – they may even be cheaper.

And if you are wondering which foods are most likely to contain harmful pesticides, check out our analysis of UK foods, Five a day without pesticides, and the Environmental Working Group’s 2014 Shopper’s Guide to Pesticides in Produce.

Eating an organic diet can reduce pesticide levels, as measured in your urine