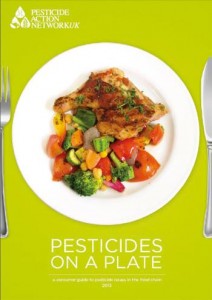 Toxic UK: pesticide levels in our food are rising

Natural Health News — A new report by the Pesticide Action Network UK has found that, contrary to many people’s assumptions, levels of pesticide residues in our food have risen over the last few years.

The report Pesticides on a Plate shows that 46% of the food surveyed contains residues of one or more pesticides. This figure has increased every year and has almost doubled since 2003 when it was just 25%.

The figures are based on an analysis of government tests looking for hundreds of different pesticides in everyday foods. This reanalysis by PAN-UK shows that overall as much as 40% of the food we eat contains residues of highly toxic substances that have been linked with developmental defects, cancers and other disorders.

No such thing as ‘safe’ levels

In most cases the traces were below official ‘safe’ levels, but this does not mean they are safe. Increasingly the science of pesticide toxicity is pointing to what is called the ‘cocktail effect’ where small doses of different poisons can combine to become extremely toxic. Around 19% of samples in this survey contained more than one residue.

Among the foods surveyed residues were found in

Worryingly, considering it has been banned for years, the survey also uncovered DDT in 35% of burgers, oily fish, liver and smoked fish.

The results of the PAN survey closely mirror those of our own review. In 2012 we studied the UK’s Pesticide Residue Committee’s (PRC) published test results for 46 types of fruit and vegetables commonly found in the UK’s shopping baskets.

We discovered that 43 of them contained pesticide residues, 41 contained multiple residues and 21 had residues over the permitted maximum residue level (MRL) and should not have been on sale. (You can read that report, Five a Day Without Pesticides, with downloadable charts, here.)

Organic is the way forward

Studies in the USA are starting to show that exposure to the chemicals in our environment, including pesticides, are having numerous effects on children and may cause problems such as Attention Deficit Hyperactivity Disorder (ADHD), autism and developmental delays.

The report, which was released just before ‘Organic September‘, points the finger at chemically intensive farming for the continued presence of pesticide residues in our food and calls on the UK government to support organic producers and also promote Integrated Pest Management (IPM) which focuses on non-chemical pest and weed control methods.

It calls also on retailers to support organic and IPM right through their supply chains and for consumers to vote with their trollies in choosing organic.