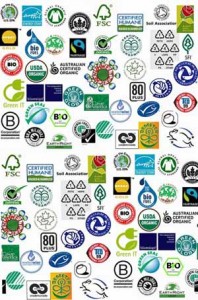 We live in a world awash with labels - which are most important to you?

In case you missed it, a recent edition of  Countryfile made a significant contribution to shopping with a conscience.

It was fantastic to see such a high profile programme giving such positive coverage to this issue and to see that the Soil Association standards came out as the clear winner when compared to the Red Tractor and even  Freedom Food schemes.

Anyone who missed the programme can have a look over the next week on the BBC iPlayer, here. It will be 10 minutes well spent.

Caring at a distance

In the mean time ask yourself – what does it mean to shop with a conscience for food?

With a growing demand for genuinely good, clean, fair, sustainable, ethical food, the benchmarks have been raised and this has been met with many more labels. Now instead of one bottom line many of us now negotiate at least three, for instance: Is it organic? Is it fairly traded? What about animal welfare? At times exercising informed choice can feel like a full time occupation.

More than anything else, this new interest in ethical shopping indicates a break away from a consumerism, based solely on value, to one based on values and rooted in less tangible, but equally important, concepts such as connection, community and care for others, especially those who live far away.

‘Caring at a distance’, as ethical shopping is sometimes defined, can help to support industry in the developing world, but it can produce pollution through air miles and manufacturing effluent and emissions, promote waste in the mountains of primary, secondary and shipping packaging required to move goods around the globe and get them on the market shelves.

A telling piece of research in 2006 researchers showed how easy it is get shunted down a single avenue of ‘caring’ and lose sight of the big picture, even when you are trying to shop ethically.

Researchers in California found that when asked to rank the importance of five potential eco labels (indicating the product was either humane, locally grown, provided a living wage to workers, US grown or small scale) nearly twice as many people were concerned about animal welfare as they were about the welfare of those who grew and picked their food (30% versus 16 %).

One of the reasons why shopping locally is so attractive to many is that it avoids these issues, and allows consumers to keep an eye on those things that aren’t covered by a label.

Some labels are genuinely useful. When you buy organic produce, for instance, you are assured of foods produced without synthetic pesticides or fertilisers, antibiotics, hormones, genetic engineering or radiation. Organic farming minimises damage to the environment and wildlife. If it is home grown you are also getting fresh food, with a higher nutrient value.

So much remains hidden

But some labels can hide as much as they tell us. Maybe more. This was flagged up recently in an article on this site by Lawrence Woodard who highlighted the alarming case of GM omega-3 oil.

The way labelling laws in the US currently stand this oil could be labelled “heart healthy” – but does not need to be labelled as a genetically modified product!

In particular labels can hide the thousands of miles our food has travelled, the dozens of steps needed to procure and add the various ingredients, the working conditions of the people who grow and produce our food, the levels of pesticide residues, the conditions the animals were kept in, the energy involved, the water used, the pollution emitted, the waste dumped.

They also still hide the carbon footprint of a product – in fact in the UK’s biggest supermarket Tesco  has now abandoned it’s trial of CO2 labelling because of the time and complexity involved in making that calculation.

The eco labels that we use as guides have become a kind of everyday ballot, and the choice of ethical goods a statement of intent for many average people that says: ‘these are the things I care about’. But to be effective that caring needs to be accompanied by informed action.

So here’s our quick guide to what the food labels you come across actually stand for.

We live in a world awash with labels - which are most important to you?