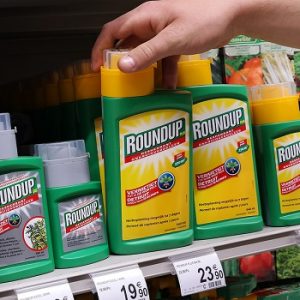 European authorities have allowed the toxic herbicide glyphosate to remain on the market for at least another 5 years. [Photo: Big Stock]

Natural Health News — After months of debate and false starts, the European Union has agreed to relicence the herbicide glyphosate – the active ingredient in Roundup – for a further 5 years.

EU member states have voted on numerous proposals to relicence the herbicide over the last two years, but votes consistently failed to reach the qualified majority necessary to move forward in one direction or another.

However with the herbicide’s license due to expire on December 15, Germany – a powerful player in the EU which has thus far abstained in the votes – opted to vote for the temporary renewal of the licence.

Shortly after the vote the Commission, the European Union’s executive, issued a statement to say that 18 countries had backed its proposal to renew the chemical’s licence. Nine countries were against and one abstained, giving a “positive opinion” by the narrowest possible margin under rules requiring more than a simple majority.

» European Member States voted this week to relicence the controversial herbicide glyphosate for a further 5 years.

» The move comes after years of debate and inability to agree on a way forward.

» Campaigners say that the time should be used constructively to phase out the herbicide and implement less toxic alternatives.

After the vote France vowed to phase out glyphosate within 3 years – though whether this is actually possible given the dearth of current alternatives to glyphosate, is debatable.

Glyphosate has been used by farmers for decades, but its safety has been cast into doubt by the World Health Organization agency, the International Agency for Research on Cancer (IARC), which concluded in 2015 that it was a probable human carcinogen.

The IARC report frustrated attempts to fully renew the herbicide in Europe, though in reality, the herbicide has been given a series of temporary extensions since 2011 while officials attempted to assess mounting evidence that it is toxic.

In June 2016 it was given an 18 month extension in order to allow the European Chemicals Agency (ECHA) time to finish conducting an investigation into the wider human health effects of glyphosate.

The final version of that ECHA report was submitted to the EC in June 2017. It concluded that there is no evidence to link glyphosate to cancer in humans, and that the herbicide should not be classified as a substance that causes genetic damage (mutagen) or disrupts reproduction.

It has since been revealed that whole sections of the ECHA’s final report were copied and pasted from an application submitted by Monsanto on behalf of the lobby group that calls itself the Glyphosate Task Force.

The revelation has cast serious doubt on the impartiality of the advice put forward by the ECHA. The impartiality and methodology of the European Food Safety Authority (EFSA), which, in part, based its official opinion on the safety of glyphosate on the report’s findings, has also been questioned.

Where Europe goes from her is anyone’s guess. Most campaigners including the UK’s Beyond GM suggest that we must use the time to make a sensible switch to less toxic alternatives.

In the US the Environmental Protection Agency’s review of the toxicity of glyphosate – which was due this year – has been hit with multiple delays including the need to incorporate new data on the herbicide’s toxicity. It is now expected in early 2018.

“The bottom line is there is enough evidence that glyphosate – together with the other ingredients which make up Roundup and other glyphosate based herbicides – poses a significant health risk which should be fully and independently evaluated. Precaution demands that we significantly restrict the use of these herbicides to limit this potential risk.” Beyond GM notes in a recent analysis.

“The glyphosate saga shows that our regulatory system and its interface with the political process and the concerns of civil society is not fit for purpose. It has been co-opted by industry interests, is not transparent and does not encompass the Precautionary Principle, which leaves us all open to health and environmental damage.”

“Unless we fix this we are destined to make the same mistakes over and over again which, with the advent of more pernicious and pervasive technologies such as synthetic biology and gene editing, will leave us far more vulnerable to harm.”

European authorities have allowed the toxic herbicide glyphosate to remain on the market for at least another 5 years. [Photo: Big Stock]