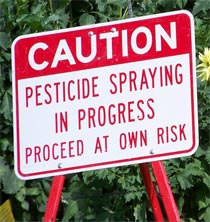 It's not just the active ingredients in pesticides that are poisonous, according to French scientists

Natural Health News — Widely used pesticides are much more toxic to humans than previously thought, due to the combination of so-called ‘inactive ingredients they contain.

That is the claim of French scientist Gilles-Eric Séralini and his colleagues in a new study due for publication in BioMed Research International.

At heart the study questions how acceptable daily intakes (ADI) for pesticides are measured. It claims that ADIs exclude any examination of inactive ingredients, or adjuvants, even though these ingredients have the potential to seriously amplify the toxicity of the active principle in commonly used pesticides.

According to the scientists: “Adjuvants in pesticides are generally declared as inerts, and for this reason they are not tested in long-term regulatory experiments. It is thus very surprising that they amplify up to 1000 times the toxicity of their active principle in 100% of the cases where they are indicated to be present by the manufacturer.”

According to the study: “The definition of adjuvants as ‘inerts’ is thus nonsense; even if the US Environmental Protection Agency has recently changed the appellation for “other ingredients”, pesticide adjuvants should be considered as the first toxic “active” compounds.”

To reach these conclusions, the researchers tested the toxicity of nine commonly used pesticides, comparing active principles and their formulations on three human cell lines (HepG2, HEK293 and JEG3).

“Despite its relatively benign reputation, Roundup was by far the most toxic among the herbicides and insecticides tested,” say the scientists “Most importantly, 8 formulations out of 9 were several hundred times more toxic than their active principle.”

Although this was a laboratory study – as opposed to one looking at effects in exposed humans, it is not the first time that this team has reached this conclusion. A 2013  paper by the scientist also showed how adjuvants in pesticides increase their toxicity, as did a 2007 study and one in 2009 study which showed that the ethoxylated surfactant (essentially the same stuff used in conventional shampoos and washing-up liquids) in the Roundup formulation doubled the toxic effect of the glyphosate.

Other scientists have found similar effects. For instance, there is evidence showing that pesticide adjuvants impair learning in bees. A study this year has shown that inactive ingredients in pesticides are highly lethal to bees. Adjuvants have also been shown to increase the persistence of some pesticides – meaning they linger longer in the environment.

In this latest paper Séralini and colleagues go so far as to suggest that the standard for measuring ADIs is inadequate because of commercial interests being brought to bear on regulators.

“This inconsistency between scientific fact and industrial claim may be attributed to huge economic interests, which have been found to falsify health risk assessments and delay health policy decisions.”

Professor Séralini is no stranger to controversy. In 2012 he published a study, in which examined over a very long term of 2 years, the toxic effects of GMO maize and Roundup products. One of the unexpected findings of the study was a link between these products and an increased rate of cancer in rats.

The findings caused an unprecedented row within the scientific, or more accurately the sceptic community and brought extreme pressure to bear on the journal Food and Chemical Toxicology which later moved to withdraw the research on the grounds that the findings were ‘inconclusive.

Far from dying down the Séralini saga is set to keep running and to keep shining a light on scientific corruption and regulatory misconduct. In December 2013, over 860 scientists worldwide condemned the retraction in an open letter and announced a boycott of Elsevier journals. This week 41 scientists and experts demand reinstatement of the rat study.

It's not just the active ingredients in pesticides that are poisonous, according to French scientists