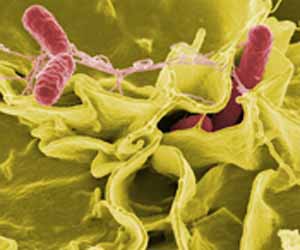 Natural Health News — The presumed ‘safety’ of the GMO herbicide glyphosate, the world’s most widely used herbicide, has been dealt another blow– this time with evidence linking it to potentially deadly antibiotic resistance.

Recently  the International Agency for Research on Cancer (IARC) a branch of the World Health Organization, declared the herbicide  “a probable human carcinogen.”

Now, an international research team from New Zealand and Mexico, writing in the American Society of Microbiology’s journal mBio has concluded that glyphosate (the active ingredient in the product Roundup, used widely on GMO Crops) and two other widely-used herbicides, 2,4-D and dicamba, change the way bacteria responded to a number of antibiotics, including ampicillin, ciprofloxacin, and tetracycline which are widely used to treat a range of serious, and sometimes deadly, diseases.

These herbicides tested are now used at such a scale that we can almost use the term ubiquitous. For one, glyphosate is used on about 94% of the soybeans and 89% of the corn grown in the US, while 2,4-D is the third-most widely used herbicide in the US, while dicamba ranks fifth in use worldwide.

According to Jack Heinemann, professor of genetics at the University of Canterbury in New Zealand, and the new study’s lead author, when pesticides are tested for adverse effects, “it’s the lethal toxicity that people focus on.” In other words, how much of the chemical will kill an organism.

Heinemann and colleagues’ study is different because it looks at sub-lethal effects – in other words what happens when the bacteria are not killed outright but instead remain alive.

The weed-killers used in the study were purchased at a local store and were used at levels specified in use directions, which means the scientists were testing chemicals actually in use worldwide rather than a special laboratory sample of the active compound.

When they exposed two bacteria strains – E. coli and Salmonella – to the herbicides they found they activated proteins known as efflux pumps which bacteria use to get rid of toxins. This defence mechanism helps the bacteria develop resistance to a toxic substance.

Glyphosate is everywhere and not just in food crops. It is sprayed on roadsides, in parks and on pavements. It is also sprayed on non-GM grain crops as a desiccant (to dry them out) before harvest.  Perhaps not surprisingly, recent surveys of bread in the UK have found that 60% of loaves contain residues, with glyphosate being the pesticide most frequently detected.)

But without a doubt it is the introduction of glyphosate tolerant (Roundup Ready) GM crops that has driver its global use up.

The majority of GM crops are bred to be resistant to glyphosate and there is evidence that not only is glyphosate more heavily sprayed on GM crops (because surrounding weeds have quickly developed resistance to it), but that these plants absorb many times more glyphosate, and its toxic breakdown product AMPA, than normal crops. This residue is passed on into the food chain.

While this study suggests that agricultural communities are at particular risk, the research also suggest that there is likely a small chance that exposure through food would produce these effects.

To deal with this growing problem of resistance in weeds, last year the US approved two new types of GMO crops – resistant to 2,4-D and dicamba. This is expected to vastly increase the amount of these toxic substances in agricultural use.

Antibiotic resistance is a serious and growing problem for human and animal health. New antibiotics are hard to find and can take decades to become available. The untested effects of chemicals like herbicides, especially as GMO crops increase their use, could make tackling the spread of antibiotic resistance that much more difficult.