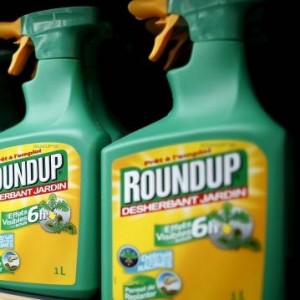 EU officials have extended the license for glyphosate while waiting for more data on health effects.

EU keeps glyphosate on the market for another 18 months

Natural Health News — After more than a year of negotiations, and amidst heavy criticism, the European Commission has this week agreed to extend its approval for weed-killer glyphosate, used in Monsanto’s Roundup, for a further 18 months.

While attention has been focused on Britain’s decision to leave the EU, the glyphosate decision – important for both conventional and organic farming – was announced without much fanfare by Health Commissioner Vytenis Andriukaitis.

The potential extension of glyphosate’s license in the EU has been fraught with delays and problems. Last week European officials tried to vote on a proposal to extend license for the widely used herbicide.

» After repeated delays the European Commission has agreed to extend the license for glyphosate – the active ingredient in Monsanto’s Roundup – for a further 18 months in the EU.

» The extension has been given to allow the European Chemicals Agency (ECHA) time to finish its investigation into the health effects of glyphosate.

» Campaigners say that regulators should use the time wisely to make a ‘glyphosate exit plan’ which will pave the way for the withdrawal of the toxic herbicide form the EU market.

However, France and Malta voted against the re-approval while seven other countries including Germany, Italy, Portugal, Austria, Luxembourg, Greece and Bulgaria abstained which meant that the panel failed to reach a qualified majority.

A history of delays

Glyphosate is the world’s most widely used herbicide. Its use has escalated dramatically with the rise in GMOs crops – which are engineered to withstand repeated sprayings. But it is also used as a desiccant to dry out cereal crops prior to harvest throughout the world.

In Europe the original ten-year license expired in June 2012. But the Commission has twice before – in 2011 and again in 2015 – granted temporary extensions.

In March 2015, the World Health Organization’s International Agency for Research on Cancer (IARC) issued a report, based on publicly available science, which classified glyphosate as a “probable human carcinogen”.

Not long after that glyphosate was found to increase antibiotic resistance.

Industry, unsurprisingly, balked at this conclusion and in November 2015, the European Food Safety Agency (EFSA), relying largely on industry-funded data, much of which is not available for public scrutiny, reached the opposite conclusion paving the way for the controversial herbicide to be given a new license.

In response to the EFSA report, 96 leading scientists called on Commissioner Andriukaitis to disregard the EFSA assessment because it was simply “not credible”.

A year later in March 2016, Italy, France, Sweden and the Netherlands joined together in opposition to a proposed vote on relicensing glyphosate for another 15 years. Under the weight of this opposition, the vote, which was due to be taken by the EU’s Standing Committee on Plants, Animals, Food, had to be postponed.

A month after that European Parliament, adopted a resolution calling on the Commission to severely restrict permitted uses of the toxic herbicide glyphosate, including all private uses, the spraying of glyphosate in public parks and playgrounds, as well as an effective ban on pre-harvest desiccation of crops.

It also called for the full and immediate disclosure of all scientific evidence used by the European Food Safety Authority to back up its claim that glyphosate is unlikely to cause harm.

The resolution, which was very much in response to citizen concerns, was not binding. But coming from the EU’s only elected body directly representing EU citizens, it carried significant moral weight.

In May 2016, the EU Commission again postponed a vote on the renewal of glyphosate in the Standing Committee, when it became clear that there was not enough support from member countries to pass the measure. Representatives from the EU’s 28 nations had been due to vote on a proposal to extend the herbicide’s license for a further 9 years.

However a strong collation between France and Germany, however, opposed the relicensing. Without the support of those two countries, the Commission had no hope of the necessary majority to push the license through.

Then again, on June 6, 2016, the European Commission failed to secure sufficient support from EU governments for its proposal to extend a license for glyphosate by up to 18 months.

The temporary extension of the license, which campaigners always knew was likely, has been granted to allow the European Chemicals Agency (ECHA) time to finish conducting its investigation into the wider human health effects of glyphosate. The results will be published by the end of 2017.

Should ECHA find that glyphosate can cause cancer or damage the endocrine system then, according to EU law, it can no longer be sold.

Campaigners are calling on the EU to use the time wisely to prepare an ‘exit strategy’ for taking glyphosate off the market.

Greenpeace EU food policy director Franziska Achterberg comments: “The Commission is about to give glyphosate an unreasonable grace period, which will continue to leave people and nature exposed to the controversial weedkiller. It should use this time to draw up a glyphosate exit plan. Glyphosate is the most widely used herbicide in Europe and has been linked to serious health concerns and loss of wildlife. It’s time for Europe to plan for a glyphosate-free future.”

EU officials have extended the license for glyphosate while waiting for more data on health effects.