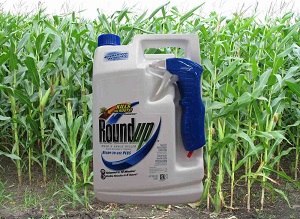 Glyphosate is toxic - that means it's bad for you. So what's it doing in our urine? [Photo@ Flickr]

Glyphosate in our urine – where is it coming from?

By Vicki Hird, Friends of the Earth
Natural Health News

In June Friends of the Earth revealed that tests on volunteers from 18 countries across Europe had found glyphosate, the world’s biggest-selling weed killer, in their urine

This raised questions about where it is coming from and what it might be doing to our bodies. In The UK 7 out of 10 samples were found to have traces of glyphosate.

Glyphosate is being used more and more in Europe – it is authorised for use by farmers as a weed killer, but also used pre-harvest as a ‘desiccant’ to dry crops such as wheat (except in Switzerland where the process has been banned). It is used by public authorities to clear weeds in parks and on paths, it is authorised for use in vineyards, on railway lines, it is used by gardeners, and it is used on many of the genetically modified (GM) crops imported into Europe as animal feed.

We know glyphosate is widely used, but we do not know how it is getting into our bodies. Incredibly, given its widespread use, glyphosate is rarely tested for. We know that glyphosate residues can be found in food – tests in the UK found residues in wholemeal bread – but because there is so little testing it is hard to know if our diets are to blame.

In Friends of the Earth’s tests, 44% of the total samples (182) were found to contain traces of glyphosate, but there was wide variation across the continent, with 90% of samples in Malta found to be positive, 70% in Germany and just 10% in Bulgaria.

A question of safety

There are three reasons why this is of concern. Firstly, there are questions about the way safety levels for glyphosate are set in the European Union. The EU relies on data provided by industry to decide what level is safe – and this data is not available for independent scrutiny.

What is more, levels permitted in foods have been increased – not because of scientific data on safety, but because of the increasing amount of glyphosate being used by farmers.

Secondly, there is a growing body of independent science that indicates that glyphosate may disrupt the human hormone system. If this is found to be the case, even low levels of glyphosate exposure at key stages of development, such as during pregnancy or at puberty, could have serious effects.

Thirdly, we are being exposed to increasing levels of glyphosate as farmers use more and more, including spraying it directly onto some crops to dry them out (desiccation) before harvesting. Levels of exposure will increase even more if new varieties of genetically modified crops designed to resist glyphosate are approved in Europe.

Evidence from the United States and Latin America, where GM crops are grown more widely, has shown health problems in people exposed to glyphosate spraying, as well as problems with ‘superweeds’ that have become resistant to glyphosate. This has led to even more weed killer being used.

If glyphosate-resistant GM crops are introduced in Europe, there is no reason to believe the situation will be any different here.

Friends of the Earth wants to know more about where the glyphosate found in our bodies is coming from and what effects it has. We are calling on the government to investigate how glyphosate is finding its way into people’s bodies; to increase the levels of monitoring in the environment and in food and water; and to introduce immediate restrictions on the use of glyphosate.

Our government must also vote against permission for glyphosate-resistant GM crops in Europe.

Glyphosate is toxic - that means it's bad for you. So what's it doing in our urine? [Photo@ Flickr]