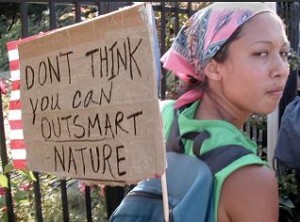 Natural Health News — After more than 15 years of using genetically modified crops, the impacts on the environmental and on food production are mixed, and high farmer use of a popular herbicide on GM crops is a cause for concern, according to a report issued by the US Department of Agriculture.

The report, Genetically Engineered Crops in the United States, which also noted some small benefits to farmers from GM crops, comes at a time when these crops are under intense scrutiny.

Consumer groups, in the US and elsewhere, are demanding tighter regulation of crop research and production. In the US there campaigns for mandatory labelling of foods made with GM are gaining momentum.

GM crops were planted on about 169 million acres (68 million hectares) in the US in 2013, about half the total land used for crops.

The patented seeds cost more than conventional seeds – the price of GM soybean and corn seeds grew by about 50% between 2001 and 2010, according to the report. In addition farmers are not legally allowed to save seeds for planting, which means that farmers must buy new seeds every season. But the companies that sell them say they make weed and insect management easier for farmers and can help increase production.

But, the ERS report says, over the first 15 years of commercial use, GM seeds have not been shown to definitively increase yield potentials, and “in fact, the yields of herbicide-tolerant or insect-resistant seeds may be occasionally lower than the yields of conventional varieties”.

Several researchers have found “no significant differences” between the net returns to farmers who use GM herbicide tolerant seeds and those who use non-GM seeds, the report states.

Resistance on the rise

However it also states that insets are increasingly becoming resistant to the toxins in these crops. Over the longer term this could translate in a rebound upswing in the use of toxin insecticides – as it did for herbicides.

In contrast, herbicide use on non-GMO corn has remained relatively level during that same time frame.

The report also comes as the USDA and the Environmental Protection Agency are in the final stages of approving the commercialisation of GM corn and soybeans resistant to the hazardous herbicide 2,4-dichlorophenoxyacetic acid (2,4-D), developed by Dow AgroSciences, a unit of Dow Chemical.

Dow is also seeking approval for wider use of 2,4-D (the main ingredient in the devastating Vietnam War defoliant Agent Orange) on US crops.

Genetically modified crops have become popular with US farmers since Monsanto introduced herbicide-tolerant “Roundup Ready” soybeans in the mid-1990s.  In deed the US grows more than half of all the GM crops in the world.

Since then, Monsanto and other seed and chemical companies have introduced varieties of corn, soybeans, cotton, canola and other crops that tolerate being sprayed with herbicide or resist insects.

And still the experiments continue

In spite of all this, the US government has allowed field trials to go ahead for thousands of new crops, ERS reported. As of September 2013, there have been around 7,800 approvals for genetically modified corn, more than 2,200 for GM soybeans, more than 1,100 for GM cotton, and about 900 for GM potatoes.

Of those releases, 6772 were for GM varieties with herbicide tolerance, 4,809 for insect resistance, and 4,896 for product quality such as flavour or nutrition, and 5,190 for drought resistance.

Monsanto has been granted the highest number of authorisations with 6,782, followed by DuPont Pioneer, with 1,405.