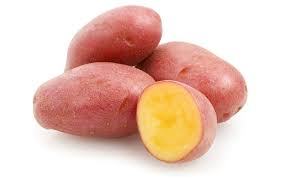 Natural Health News — Campaigners have criticised the PR surrounding a new blight resistant GM potato in the UK as unbalanced and have called the potato itself a waste of money.

“This GM field trial further highlights just how far behind GM technology is compared to conventional breeding. A blight resistant potato family of varieties (Sárpo) has already been bred using conventional methods and is commercially available, as are several other varieties of blight resistant potato. The fact that this GM potato variety is still at the field trial stage clearly demonstrates what a failing and old technology this is.”

“The law says that they will have to be labelled GM. Experience shows that the UK doesn’t want GM in its shopping basket, and British farmers are far too smart to grow something they can’t sell.”

In fact, GM potatoes were rejected by major food companies in the US in 2002, including by McDonalds, McCain’s, Burger King and Pringles and there has never been a market for them here in the UK. 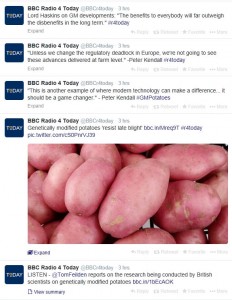 Who needs to hire a PR agency when you can get the BBC to do the job for free? A sample of pro-GM tweets from Radio 4 Today. Or should that be Radio 4 TOADY? (click to enlarge).

Pro-GM campaigners were interviewed on today’s BBC Radio4 Today show, and the programme was notable for its absence of dissenting voices or critical questions. Indeed National Farmers Union President Peter Kendall, an outspoken proponent of GM farming called the new potato a “game changer”. Kendall, who is stepping down from his role in a few weeks’ time, has likened anti-GMO activists to  “Nazi’s”. So much for balanced reporting.

The BBC has taken its role as a mouthpiece for the GM industry to new extreme, however, by tweeting cheerfully about the “game changing” triumph of the GM potato.

The tweets have caused an inevitable twitter storm of disapproval.

The BBSRC, it says, has spent £3.2 million on the research to date but considerably more research will be needed to create a commercial product because more genetic modification is needed to resist other strains of blight.

“Taxpayers’ money is being wasted on yet more GM research that is a very long way from delivering what farmers really need” said Dr Helen Wallace, Director of GeneWatch UK “There are blight-resistant non-GM potatoes already on the market. Why waste money, take unnecessary risks, and end up with a product that no one wants to eat?”

The paper shows that one variety of GM potato gave some protection against one strain of blight (known as “Pink 6″) in the third year of trials. [John Innes Centre’s] other GM potato strain failed and the protected strain made no difference to the crop in the first two years when blight was limited or late.”

In addition she notes that the GM potato was not tested for resistance to other strains of blight, such as the aggressive “Blue 13” strain, and the researchers admit that the single genetic modification cannot protect against all strains.

Blanket spraying of these crops with weedkiller has led to the spread of herbicide-tolerant superweeds across more than half of US farmland and caused a major reduction in the numbers of Monarch butterflies, due to loss of habitat.

British consumers are unwittingly contributing to this environmental damage – which includes a devastating reduction in the population of Monarch butterflies – by eating unlabelled meat, milk and eggs fed on imported GM feed.

While the risk of contamination of non-GM crops via cross-pollination would be less with GM potatoes than with some other crops, there is risk of contamination in later years via what are called potato volunteers – small, missed or spilt potatoes left in the ground at harvest which can remain viable for some time, and which already cause major weed problems for potato growers. Cross-pollination from volunteers would pose significant risks.

Crops like this are part of the  GM industry’s PR strategy which continually focuses on promises of future GM crops, which are never delivered in reality, rather than on the real problems with GM crops in the ground today.

“The GM industry is always promising jam tomorrow, but it’s never jam today. The real next generation of GM crops will be tolerant to more toxic weedkillers such as 2,4-D, and cause even greater damage to the environment and wildlife” said Dr Wallace.