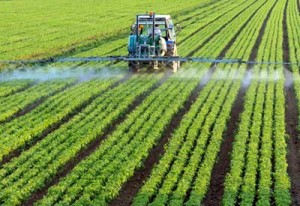 More evidence that glyphosate, the active component of Monsanto's Roundup, could be toxic to farm animals and people

Natural Health News — A new analysis shows that levels of glyphosate – the active ingredient in the Monsanto’s herbicide Roundup – are significantly higher in people who are chronically ill.

The study by German researchers also found higher levels of glyphosate in the urine of livestock fed conventional (GMO-containing feed).

The scientists took urine sample from German dairy cows raised conventionally and in GMO-free areas, as well as organs from slaughtered conventionally reared cows including gut wall, liver, kidney lung and muscles. They also collected urine from Danish cows as well as hares and fattening rabbits (rabbits raised for meat).

They also took samples from both healthy and chronically ill humans.

The study results, released ahead of publication in the Journal of Environmental and Analytical Toxicology, showed that cows kept in GM-free regions had significantly lower glyphosate levels than those that were conventionally reared. Sampled organs and tissues from all cows revealed the presence of glyphosate; how the cows were reared did not affect this result.

They conclude that the “presence of glyphosate in urine and its accumulation in animal tissues is alarming even at low concentrations. Unknown impacts of glyphosate on human and animal health warrants further investigations of glyphosate residues in vertebrates and other non-target organisms.”

This new data builds on findings by the same team published in 2013.

That study found that all cows investigated at eight Danish dairy farms had glyphosate in their urine. Blood testing revealed that the glyphosate was toxic to the normal metabolism of the cows.

In addition, the researchers found that levels of the essential trace minerals cobalt and manganese were “much too low in all animals for proper function and immune response (in comparison with reference levels)”.

They speculated that this was a result of glyphosate’s strong chelating (binding) effect on cobalt and manganese in the soil, making these minerals unavailable to plants and, thus to the animals that eat them. Indeed concerns about glyphosate’s effects on the soil and the environment are growing.

Glyphosate is the most widely used herbicide in the world and its use has risen dramatically as GM crops – which have been engineered to be resistant to its effects –  have become more widely planted. Although GM crops were supposed to reduce pesticide use, in fact they have had the opposite effect.

In other words once it is in your food supply there is nothing you can do to protect yourself (except eat organic food).

Glyphosate is not just used on GM crops though. In agriculture it is used as a desiccant (drying agent) prior to harvest, in order to increase yield. it is also sprayed on sidewalks and streets – indeed anywhere where weeds can be found growing.

Although Roundup and its active component glyphosate are promoted as safe for humans and animals, links between glyphosate/Roundup and birth defects in laboratory animals have been known for decades – and the same effects have been reported in livestock animals whose feed is contaminated with Roundup.

Similarly, a recent study suggests that glyphosate may be the cause of a fatal, chronic kidney disease that is affecting poor farmers around the globe.

More toxic then we think

Likewise this is not the first study to demonstrate glyphosate levels in humans. In 2013 year, city-dwelling people in 18 countries across Europe were found to have traces of glyphosate in their urine.

Recent data has also shown that glyphosate is made more toxic by the so-called ‘inactive’  ingredients in round-up.

In a study of Ontario farming populations, exposure to glyphosate nearly doubled the risk of late miscarriages in humans. In addition, the ethoxylated surfactant in the Roundup formulation doubled the toxic effect of the glyphosate.

The inactive ingredients, along with the glyphosate, ends up in our food and our animal feed. Which means it ends up in us too. Yet, no study has yet shown how much of these ‘inactive’ ingredients we also consume when we eat conventionally grown produce and animal products.

Similarly, like many known endocrine disrupters, glyphosate may be toxic at lower doses than at higher ones.

As studies like this accumulate, the credibility of those who continue to promote glyphosate and Roundup as ‘safe’, it seems, is rapidly disappearing.

More evidence that glyphosate, the active component of Monsanto's Roundup, could be toxic to farm animals and people