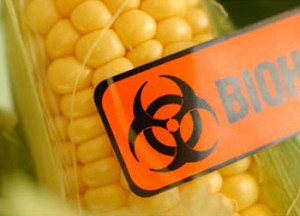 Natural Health News — Rats fed a lifelong diet of one of the best-selling strains of genetically modified maize suffered tumours and multiple organ damage, according to a French study published today.

The report which is well-timed to support the Just Label It campaign in the US and inform the vicious battle over Proposition 37 in California, is set to add fuel to the debate over the safety – or otherwise – of GM crops.

In an unusual move, the research group behind the research did not seek outside comment on their paper before its publication in the peer-reviewed journal Food and Chemical Toxicology.

This is thought to be because of very real fears (see below) that the biotech company whose maize they used, would seek to suppress their findings.

Professor Gilles-Eric Séralini and colleagues at the University of Caen in France  found that rats fed on a diet containing NK603 – a seed variety from crop giant Monsanto made tolerant to repeated spraying of the best-selling weedkiller Roundup – or given water containing Roundup at levels permitted in the United States died earlier than those on a standard diet.

The researchers were looking for chronic effects from the GM feeding regime, but found more than they bargained for.  Animals on the GM diet suffered hormone imbalance and more and bigger breast tumours, as well as severe liver and kidney damage. The researchers said 50% of males and 70% of females died prematurely, compared with only 30% and 20% respectively in the control group.

The new paper is supported by the independent research organization, Committee for Research and Independent Information on Genetic Engineering (CRIIGEN).

“This is the most thorough research ever published into the health effects of GM food crops and the herbicide Roundup on rats. It shows an extraordinary number of tumours developing earlier and more aggressively – particularly in female animals.  I am shocked by the extreme negative health impacts.”

“The rat has long been used as a surrogate for human toxicity. All new pharmaceutical, agricultural and household substances are, prior to their approval, tested on rats. This is as good an indicator as we can expect that the consumption of GM maize and the herbicide Roundup, impacts seriously on human health.”

Dr Antoniou and other experts discuss the findings of the study in this video.

Where are the regulators?

In the UK Lawrence Woodward from Citizens Concerned About GM said: “These results are extremely worrying. Health problems associated with GM Round Up Ready crops have been reported before, but this is the first time research has so clearly demonstrated that genetic engineering itself can cause health risks”.

He added that the research raises significant questions about the rigour of the GM regulatory process. “The European Food Standards Authority (EFSA) does not require tests that are as extensive as these, and it’s clear they are missing things. These findings mean that EFSA’s handling of GM is inadequate.”

A lifetime of data

Séralini is part of a team that flagged previous safety concerns based on a shorter rat study in a scientific paper published in December 2009.

That study was a comparative analysis of blood and organ system data from trials with rats fed three main commercialised genetically modified (GM) maize (NK 603, MON 810, MON 863), which are present in food and feed in the world. The analysis showed that all three GMOs were associated with the kidney and liver damage, though other effects were also noticed in the heart, adrenal glands, spleen and on stem cells.

This study is important, however, because it takes things a step further by tracking the animals throughout their two-year lifespan.

According to the researchers, the first large detectable tumours appeared after four and seven months in males and females respectively but only after 14 months in the female control group and 23 months in a control male. However, the majority of tumours were only detectable after 18 months. In other words, the damage was slow to develop.

As with previous negative studies on GM, we can expect a furious response to the data from pro-GM pundits, and yet every year more and more research shows that, at best, we cannot simply assume that GM is safe and, at worst, it is dangerous to consume.

In a joint statement, in response to the research, Agriculture Minister Stephane Le Foll, Ecology Minister Delphine Batho and Health and Social Affairs Minister Marisol Touraine said they had asked the National Agency for Health Safety (ANSES) to investigate the finding.

“Depending on ANSES’s opinion, the government will urge the European authorities to take all necessary measures to protect human and animal health,” they said.

“(The measures) could go as far as invoking emergency suspension of imports of NK603 corn to Europe pending a re-examination of this product on the basis of enhanced assessment methods.”

Gilles Eric Séralini has worked tirelessly to expose the health hazards of Monsanto’s GM maize varieties, its herbicide Roundup, and the inadequacies of the EU regulatory system for GMOs and pesticides.

In 2005 he reported that human placenta cells were very sensitive to the herbicide Roundup, even at doses much lower than those used in agriculture. Like other scientists before him he was severely criticised by the GM establishment and his work and professional reputation pilloried in the media, which accused him of being more of an ecological fundamentalist than a serious scientist.

The main complaint of the pro-GM brigade was that laboratory studies using cells prove little and that only feeding studies using animals or humans were worth paying attention to.

It’s an interesting argument given that most of the medicines we take today, and indeed much of the ‘safety’ of GM, as defined by the biotech companies that produce it, depends on laboratory studies on cell cultures.  Indeed cell culture studies are seen as a first step in any scientific process. Should such studies turn up meaningful data, the next step is to see if the effects can be replicated in lab animals or humans.

It is also a not entirely unpredictable irony that early responders to this current study have moved their own goal posts, protesting that animal studies aren’t predictive of human risk. Though again, if this is the case, one could question the basis on which almost every drug currently in use has been passed by government regulators.

A year earlier,in 2004 Séralini, was on the committee that reviewed MON 863 for the French government.

Monsanto sought approval in Europe to introduce a rootworm resistant MON 863 maize. Critics argued that Monsanto’s data was biased and incomplete and that regulatory bodies had been unduly influenced by biotech companies. The GMO Panel of the European Food Safety Authority (EFSA) stated that it had no reservations about approving MON863.

And yet, contained in the report were references to data that Monsanto provided, which suggested changes in some blood cell parameters and in kidney weights of rats that were tested, though these studies were not publicly available.

As a condition of the peer review process, Monsanto placed a gagging order on the studies, preventing reviewers from disclosing their details. One of these reviewers was Dr Arpad Pusztai whose own animal feeding studies had previously shown major damage to the gut walls of  animals fed GM potatoes.

Environmental group Greenpeace sued for release of data that Monsanto had locked away. A German court eventually ordered its release in June 2005.

With the gagging order lifted Séralini and his team, were able to fully review the data. His reanalysis of a Monsanto feeding trial, which was eventually published in 2007 showed serious damage to the liver and kindeys of laboratory animals and raise serious questions about the regulatory process for GM.

At the time Professor Seralini commented: “These revelations are profoundly disturbing from a health point of view. They are certainly sufficient to require new and more carefully conducted feeding studies and an immediate ban from human or animal consumption of GM maize MON 863 and all its hybrids. This maize cannot now be considered safe to eat. We are now calling urgently for a moratorium on other approved GMOs while the efficacy of current health testing methods is reassessed.”

In 2010 Séralini sued  the French Association for Plant Biotechnology (AFBV) for libel following a smear campaign which he alleged began with that organisation and which had damaged his reputation, reducing his opportunities for work and his chances of getting funding for his research. In January 2011 he won his case.

That same year Séralini and colleagues reviewed 19 animal based studies, some of which showed that consuming genetically modified corn or soybeans led to the organ disruptions, with male kidneys responding the worst.

A number of male rats who were fed Monsanto’s MON 863 corn developed smaller kidneys with significant inflammation among other markers of disruptive kidney filtration and function problems. Some animals experienced changes in metabolic rates in the liver. Female genital cancers increased in the second generation, and some of the animals who were fed genetically modified organisms had altered body weights in at least one gender, which is considered to be a very strong predictor of side effects displaying in various organs related to toxins in the diet.

Earlier this year Séralini and his colleagues announced the results of another laboratory study which examined the effects of two Bt toxins (in the presence and absence of the herbicide Roundup) on cultured embryonic kidney cells. The results suggested the GM toxins could cause serious damage to kidneys.

Consumers have a right to know – and to say ‘no’

And so we’ve come full circle. Yet another feeding study has shown that animals fed GM maize get sick and die more quickly than those that are not fed GM maize.

If anyone ever wondered why Californians are fighting so hard to get proposition 37, the mandatory labelling of GM food, passed this November the work of Séralini, Pusztai and others, who without support and too often without the lavish funding that is given to pro-GM scientists, is the reason.

If anyone ever doubted the GM food should be labelled, for our safety and to allow consumers to choose, and more importantly to refuse to eat GM, they must now think again.