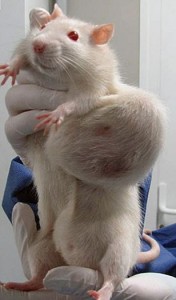 Natural Health News —  The knives came out immediately in the wake of this week’s study showing that rats fed a lifelong diet of GM maize developed more and bigger breast tumours, as well as kidney and liver dysfunction.  But these comments, mostly from rent-a-quote scientists and web trolls, are too little too late.

As we noted in our early analysis of the trial and its context, this was not the first time that researchers have reported such outcomes.

The main complaint of the GM apologists to earlier studies was that laboratory studies using cells prove little and that only feeding studies using animals or humans were worth paying attention to.

Given that most of the medicines we take today, and indeed much of the ‘safety’ of GM, as defined by the biotech companies that produce it, depends on laboratory studies on cell cultures, it was a pretty poor excuse even then.

Indeed, cell culture studies are seen as a first step in any scientific process. Should such studies turn up meaningful data, the next step is to see if the effects can be replicated in lab animals or humans.

Early responders to this current study have followed a familiar pattern of moving their own goal posts to suit their arguments, protesting that animal studies aren’t predictive of human risk. Though again, if this is the case, one could question the basis on which almost every drug currently in use has been passed by government regulators.

Some have complained that the terrible pictures of sick and dying rats were emotive. But the results are what they are, pictures don’t change that fact. If they are emotive then they are genuinely so and we need to search our own consciences about what we feel – and what the right response to those feelings is.

Also, given that there seems to have been a curious blackout of the study results on BBC TV news, these visuals are even more important in illustrating the scientists’ findings.

Some have also argued that the control group was ‘too small’ even though the two-year experiment followed international OECD guidelines. It is standard practice for the control group to be matched in size to the experimental groups. In this study, therefore, there were 20 animals in each group. And once again such complaints ignore the wider historical context of similar studies showing much the same thing.

The scientists behind the French study have dealt ably with all these criticisms.

Now Dr Michael Antoniou, a reader in molecular genetics at King’s College, London, and member of Criigen – the Committee of Research & Independent Information on Genetic Engineering, which supported the study – has also hit back, vigorously refuting questions raised by fellow scientists about the robustness of the study and in particularly criticisms that the Sprague-Dawley breed of rat used was prone to breast tumours anyway.

“In addition, many studies – including many from industry – on GM foods use SD rats. Based on this history of use, it was appropriate to use this strain too. If it was the wrong strain to use here then it was wrong in many previous GM food safety feeding studies conducted by industry and upon which marketing approval was granted.”

Putting them out of their misery

Antoniou continued: “The key is that there were both quantitative and qualitative differences in the tumours arising in control and test groups. In the former they appeared much later and at most there was one tumour per animal, if at all.

“In the latter case, the tumours began to be detected much earlier (4 months in males; 7 months in females), grew much faster and many animals had two or even three tumours.

The attempts of GM pundits to discredit this and other damning studies in a similar vein are looking increasingly ridiculous and desperate. Whatismore anybody with an ear to the ground can see that the public is no longer buying the hokum, the hard sell and the scientific mumbo jumbo that has long been used to promote – and make excuses for – GM.

In a recent Countryfile poll, in which 9500 people took part, 79% said GM crop trials should not be allowed to go ahead in the UK.

We don’t want it. We don’t need it. We refuse to be poisoned by it.

It’s time to take the billions we continue to spending on his clapped-out, flawed and failed technology and put it to more positive use.