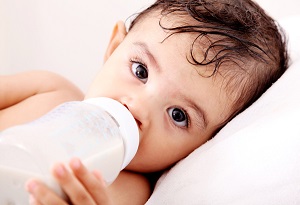 Around a quarter of all infant formulas have soya as an ingredient - could there be a link between the soya and seizures in autism?

Increased seizure risk in autistic children – is there a GMO link?

An accidental discovery has linked the use of soya in infant formula to increased rates of seizures in autistic children.

It raises critical questions. Is genetically engineered soya a factor? And can control diets in US research trials be trusted?

The research team from the University of Wisconsin-Madison found that children with autism who were fed soya-based formula had 2.6 times as many seizures as children fed a dairy based formula.

Seizures occurred in 4.2% of the soya group compared to 1.6% of the dairy group.

The researchers stumbled across the link accidentally when they changed the diet of lab mice from a “standard” commercially supplied ration to a bespoke one.

They unwittingly removed soya from the rodent’s diets and almost immediately noticed an reduction in the incidence of seizures in the mice.

Labelled for risk in the EU – unlabelled in the US

They analysed data from 2000 infants and found a significantly higher incidence of seizures in children given soya based formula.

It seems that boys may be more affected than girls.

According to research leader, Dr Cara Westmark, this is a preliminary study but; “We can say that we have a potential association between the use of soy-based formula and seizures in autistic children; we can’t say that this is cause and effect.”

She points out that “soy is a widespread ingredient in many food products, and 25% of infant formulas are soya-based, so this is something that needs to be studied.”

Because of its potential as a major food allergen, under EU regulations soya-based ingredients must be clearly labelled and identified on all food products.

This is not the case in the US.

Is there a GMO link?

Soya is widely used for its high protein content and in the US over 90% of all soya grown is genetically engineered to tolerate being sprayed with the Roundup, the glyphosate based herbicide.

As we have previously highlighted here; Roundup has separately been implicated in rising rates of autism in the US.

This study did not investigate any possible connection between autism or seizures in children and Roundup; but growing concerns about environmental pollution, chemical residues in food and the nature of diet require that research is increased and broadened.

Much more work must be done on soya to try and establish why it is potentially damaging to infants.

We need to look at the huge use of soya in processed food and animal feed and whether its use is linked to the rising levels of non-communicable diseases affected the western world.

And given the preponderance of genetically engineered soya in the food and feed chain the health impacts of GMO crop production should be assessed.

Are regulatory health and nutrition trials fit for purpose?

But following this study questions also need to be asked about the rigour of nutrition and health research in US laboratories.

The changes the researchers made in lab rodent’s diet and which led directly to this study were serendipitous.

This raises questions about whether standard, commercially available, laboratory ‘control’ diets are adequately tested for the presence of contaminants, toxins and allergies.

It is especially an issue when genetically engineered foods are used as a matter of course as they are in the US.

The belief that GMO crops are “substantially equivalent” to conventionally grown ones is unravelling as evidence shows that “unintended effects” within the crops genome occur.

Some effects – for example, increased allergenicity in soya – could introduce an unknown and unintended variable to the control diet thereby giving misleading results.

This may have been a small, preliminary study but it raises significant questions about the nature of infant diets, the use of soya – and particularly GMO soya in food – and whether regulatory research trials are fit for purpose.

Around a quarter of all infant formulas have soya as an ingredient - could there be a link between the soya and seizures in autism?