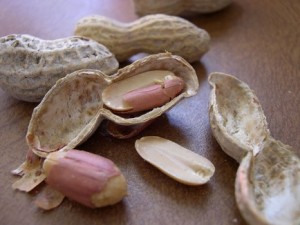 The rise in chidlhood allergies has paralleled the rise in autism [Image: Sideshowmon - Morguefile]

The autism and allergy overlap

The food allergy and autism communities generally seen as separate groups have more in common than they may realize.

One has only to look at the meteoric rise of both epidemics in the last 20 years to wonder if they are connected. In fact, I contend that they are the same story with the same causes and overlapping symptoms but with different outcomes. It is as though one overwhelmed child turned left while the other turned right. 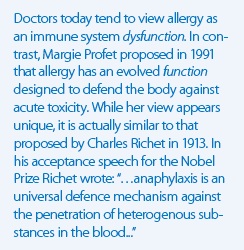 Children with life threatening food allergies often have a “mixed bag” of health concerns that can include ADHD, environmental sensitivities and gut inflammation. Typically, parents of these children pay such close attention to the food anaphylaxis that these “lesser” issues are often dismissed or medicated away. And yet, if we view this mixed bag as a collection of meaningful symptoms, a very different picture emerges. This picture mirrors that of many children on the spectrum.

In ‘The Function of Allergy: an immunological defense against toxins’ (1991) [i], Margie Profet confirms that any mammal overwhelmed and unable to detoxify will defend itself with allergy. This evolved defense is designed to expel the toxin(s) as fast as possible by sneezing, vomiting, itching or to prevent it from circulating by a drop in blood pressure.

Toxic exposures – any combination from air, food, water, drugs, pathogens, or vaccines – that precipitate the allergies can also result in a host of other health issues. The so-called “neuro-typical” (NT) kids with severe food allergies are not NT at all if we ask additional questions about fine or gross motor skills, unusual “gifts”, attention deficit, rage, sensory processing issues, hyperactivity and more.

By illuminating the ground shared by the food allergy kids and children on the spectrum, a broader collective awareness may emerge. This awareness will bring greater pressure to bear on addressing causes and forcing change.

Like the word “autism”, allergy and anaphylaxis were coined early in the 20th century. These last two were created to describe reactions to sera administered for the first time in history using the hypodermic syringe. When children began to fall violently ill following the use of this new technology, doctors scrambled to understand why.

Pediatrician Clemens von Pirquet in 1906 saw the symptoms as an “altered reactivity” or allergy. Anaphylaxis “against protection” was coined by Charles Richet around 1913 to describe the condition he created in animals during immunization experiments.

Autism was coined by a Swiss psychiatrist in 1912 and Asperger’s after the work of Hans Asperger in the 1930s. Leo Kanner in the 1940s provided a foundation for understanding the environmental causes of autism.

Food allergies and autism in children increased slowly until about 1990 at which time their prevalence abruptly accelerated.

The first wave of affected children

It seemed to happen almost overnight about 20 years ago. Something changed suddenly at the same time in many Western countries to make scores of children terribly unwell: 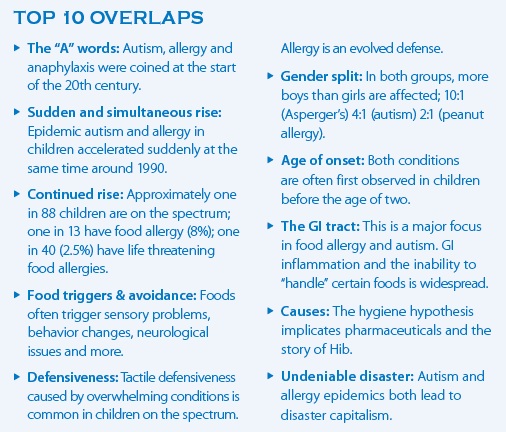 Many severely food allergic children have atopy—allergies causing eczema, asthma and behavior issues. Food allergies are the main causes of ADHD according to a 2001 study in the Lancet.[iv] The opiate effect of dairy and wheat proteins on some children is well documented. Unrecognized allergies to chemicals, molds and more can also cause behavioral changes.

It is not known how many children on the spectrum have severe allergy, but most avoid certain foods that make other symptoms worse. The worst of these according to Kenneth Bock, MD in ‘Healing the New Childhood Epidemics‘ (2007) are dairy, chocolate, yeast-growing foods, gluten and casein.

In ‘Allergies and Autism‘ (2010), Michael Dochniak tells the story of a boy with multiple allergies who regressed after an anaphylactic reaction to latex. The role of allergy in autism can be profound and individual.

Allergy and anaphylaxis function to defend the body against acute toxicity. The body may risk death to defend itself against perceived certain death.

Children on the spectrum can exhibit defensiveness. Cari Neal in ‘Tactile Defensiveness and Patterns of Social Behavior in Autism’ (1997)[v] explains that social withdrawal functions to limit tactile stimulation. Temple Grandin, quoted by Neal, confirms that for her, withdrawal is a defense from a “tidal wave of stimulation.”

Gender and age of onset

In 1944, Hans Asperger believed that girls were unaffected by the syndrome he described although he later revised his conclusion. The gender gap is as high as 10:1 for Asperger’s, and 4:1 for autism. In 1964, Bernard Rimland observed that boys tended to be more vulnerable to “organic damage” than girls.

Studies on peanut allergic children reveal that twice as many boys have the condition than do girls.

Many parents see the 18 month mark or before the age of two as a point of change or regression for children on the autism spectrum.

The general age of onset for life threatening peanut allergy (the first reaction) has been declining: from 24 months of age for kids born between 1995 and 1997; 21 months for those born before 2000; and for those after 2000, it is now about 14 months of age.

Since Charles Richet’s 1913 Nobel Prize winning research, allergists have defaulted to the idea that food allergy is caused by digestive failure, or a “leaky” gut. Or it was, until the explosion of food anaphylaxis in children starting around 1990. It seemed impossible that gut failure could occur on such a scale and so suddenly.

The gut is integral to the immune system and the brain. Also called the “second brain” because it is connected by millions of neurons to the central nervous system, the gut will react immediately when challenged by toxin or trauma:

In cases of extreme stress … the higher brain seems to protect the gut by sending signals to immunological mast cells in the plexus. The mast cells secrete histamine, prostaglandin and other agents that help produce inflammation. This is protective. By inflaming the gut, the brain is priming the [it] for surveillance.[vi]

The bystander effect occurs when compounds in the body/gut at the time or moment of the extreme stress become targets for allergic sensitization.

And it goes without explanation that children on the spectrum struggle greatly with gut inflammation. What could have the power to provoke this so early in the lives of hundreds of thousands of children?

Many following allergy and autism debates believe that both epidemics are man-made. And the medical community appears ready at last to consider this within the “hygiene hypothesis”: 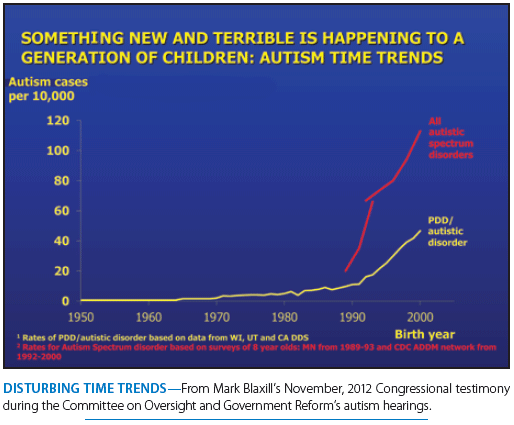 The hygiene hypothesis suggests that vaccination, antibiotics and bug-killing products have unhinged the immune systems of children. Humans have co-evolved with microbes and gut parasites/worms, and without them are vulnerable to inflammatory disorders. Our bug-free, vaccine obsessed, pesticide loving Western existence appears to have doomed us to allergy and autism.

Yes, the hygiene hypothesis has entered the discussion on causes of autism. A 2007 Medical Hypotheses article by K. Becker suggests that immune pathways affected by western hygienic practices may impact brain structure or function contributing to autism. Becker mentions “immunization” in this light but in confessing its “controversial” nature does not pursue it.

Clarifying the matter is historical fact. The abrupt rise of allergy and autism around 1990 coincided with reforms to the pediatric vaccination schedules of many Western countries.

In 1986, the US National Childhood Vaccine Injury Act in essence de-regulated vaccination: no one could sue a vaccine maker without government approval. Largely relieved then of liability, manufacturers moved to meet government demand addressing new “diseases of priority” established by the US Institute of Medicine.

Increases to the vaccine schedule in many Western countries began in 1987 with the Haemophilus influenza type B (Hib) vaccine. By 1991, doctors did not hesitate to give this new conjugate vaccine to two-month-old children simultaneously with vaccines for diphtheria, tetanus, pertussis, and polio. This move was unprecedented. In that year, more than 17 million doses of Hib vaccine were sold in the US alone. In 1992, additional doses of combination vaccines were included in the schedule. Hib was a revenue-generating “blockbuster product” according to a 1998 WHO publication.

At the same time, coverage rates for vaccination soared. Between 1993 and 1995, the Clinton administration’s Childhood Immunization Initiative provided federal funds aimed at 90% coverage of all infants. Vaccination became a requirement before entry into many preschools and daycare centers. By 1997-98, childhood vaccination rates reached record highs. Canada, the UK, and AU followed the American example.

The Hib, within an intense schedule that includes five-vaccines-at-once, has been the last straw in my opinion, tipping scores of children into peanut allergy.

Where the DPT-IPV with Hib is used en masse, peanut allergy follows: first in Western countries including the UK, the US, Canada, and ACT Australia, then after 2001 following its use with high coverage rates in Tasmania, Hong Kong, Singapore and most recently India.[viii]

Hib plays a role in autism according to Brian Richmand in ‘Hypothesis, Conjugate vaccines may predispose children to autism spectrum disorders’. Richmand suggests that the five-in-one with Hib has interfered with nerve myelin in the brain:

Richmand further suggests that girls who received this vaccine carry antibodies that have the potential to damage nerve myelin and result in autism in their children.

In ‘Save the children (and make money)’, published in The Wall Street Journal (2009), writer James Altucher noted the massive rise in the last two decades in peanut allergy, asthma and more among children. The kids are sick and getting sicker, Altucher observed. So, he thought an “Autoimmune Index” would be a good idea:

Such an index would consist of the best mix of stocks that have good lower multiples that will supply the arms in our ongoing war against autoimmune diseases.[x]

Altucher lists the drugs created for these conditions, their manufacturers, the status of their stocks and their billion dollar profits. And then without slowing he offers possible causes for the pediatric epidemics:

Are the products causing the epidemics made by the same companies now making the remedies? It seems investors can make money at both ends of the epidemics.

This is disaster capitalism.

The century old pattern of increasing drug and vaccine consumption in Western countries has meant profit for some but devastation for many more. The autism community is aware of the conflicted interests that underpin this pattern and the autism epidemic. And parents of anaphylactic children are listening.

With a growing awareness of the ground these communities share, my hope is that they will connect meaningfully to force change leading to prevention of these serious – and altogether avoidable – health issues.

Reprinted with permission from the Autism File www.autismfile.com

The rise in chidlhood allergies has paralleled the rise in autism [Image: Sideshowmon - Morguefile]