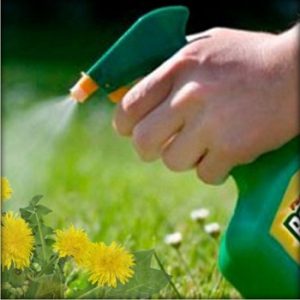 A California jury has ruled that the herbicide glyphosate (Roundup) can cause cancer. [Photo courtesty Beyond GM]

Natural Health News — A San Francisco jury has found that the widely used herbicide, glyphosate (also known as Roundup) can cause cancer.

The jury returned its verdict in the case of a former groundskeeper, Dewayne ‘Lee’ Johnson, who developed terminal cancer after regular exposure to the herbicide.

It ordered the agrochemical giant Monsanto to pay $39.2 (£30) million in compensatory damages and $250 (£195) million in punitive damages for failing to warn consumers that exposure to Roundup weed killer causes cancer.

Mr Johnson filed the lawsuit against St. Louis-based Monsanto Company on January 28, 2016, alleging that exposure to the Roundup herbicide he sprayed while working as a groundskeeper for the Benicia Unified School District caused him to develop non-Hodgkin lymphoma (NHL).

His case was the first of its kind to proceed to trial due to his terminal diagnosis.

After 8 weeks of trial proceedings, the jury found unanimously that Monsanto’s glyphosate-based Roundup weed killer caused Mr Johnson to develop NHL, and that Monsanto failed to warn of this severe health hazard. Importantly, the jury also found that Monsanto acted with malice, oppression or fraud and should be punished for its conduct.

» A California jury has ruled that the herbicide glyphosate (also known as Roundup) can cause cancer.

» The jury found that Monsanto knew about the risks of its herbicide but that it damages for failed to warn consumers that exposure to Roundup weed killer causes cancer.

» This is the first of several thousand pending cases in the US that allege a link between glyphosate and the development of cancer. Monsanto is expected to appeal.

Despite the world’s foremost authority on cancer—the International Agency for Research on Cancer (IARC)—listing glyphosate as a probable carcinogen in 2015 Monsanto has continued to promote glyphosate as safe.

This is a line that the company has maintained for years, yet a mountain of testimony and documents was admitted during the trial. Johnson’s attorneys proved through testimony from Monsanto’s witnesses that company employees “ghostwrote” scientific articles and paid outside scientists to publish the articles in their name.

Internal documents also revealed that a scientific advisor hired by Monsanto told the company that past testing for Roundup was insufficient because glyphosate, the active ingredient in Roundup, was tested in isolation without the other chemical ingredients that make up the Roundup formulation.

“Many of these confidential Monsanto documents were unsealed for the first time,” said co-lead counsel David Dickens. “They show that Monsanto knew that its testing was insufficient and that there was a synergistic effect when glyphosate is combined with surfactants which help the glyphosate penetrate both plant and animal cell walls.”

In other now-public documents, Monsanto employees reacted to California EPA’s listing of glyphosate as a carcinogen by calling Californians “liberals and morons,” overwhelming Monsanto like a “zombie movie” that they had to take out one at a time starting with the 2016 presidential election.

“We were finally able to show the jury the secret, internal Monsanto documents proving that Monsanto has known for decades that glyphosate and specifically Roundup could cause cancer. Despite the Environmental Protection Agency’s failure to require labelling, we are proud that an independent jury followed the evidence and used its voice to send a message to Monsanto that its years of deception regarding Roundup is over and that they should put consumer safety first over profits.”

In addition to hearing from expert witnesses, the jury listened to heart-wrenching testimony from Lee Johnson and his wife, Araceli.

Araceli recalled for the jury the many sleepless nights Lee spent crying in bed when his children were not around. “He tried to hide it, and I think he tried to show that he was strong,” she said. “He tried to be positive; he wanted to be…for us and the kids.”

When Lee took the stand, he told the jury how scared and confused he was after receiving the news that he had cancer. He also described the times he contacted Monsanto to see if the skin lesions he developed were related to his use of Roundup. When he did not hear back from the company, he continued to use the herbicide.

Most notably, Johnson testified that he would never have used Roundup if he had known of the dangers, and accused Monsanto of concealing Roundup’s safety risks to continue profiting from its billion-dollar herbicide.

“I never would’ve sprayed that product on school grounds or around people if I knew it would cause them harm,” Johnson said during emotional testimony. “It’s unethical. It’s wrong. People don’t deserve that.”

Amazingly the jury in this trial was not allowed to see many of the internal documents that were uncovered during the trial. However, all these documents are now in the public domain and will inform the trials of more than 4,000 people from across the US who have also filed suit against Monsanto based on allegations linking Roundup to cancer.

Monsanto is expected to appeal the San Francisco court’s decision. In the meantime, the next Roundup cancer trial against Monsanto is another state case and is scheduled to begin in October in St. Louis, Missouri with dates for further cases to be announced in the next couple of months.

A California jury has ruled that the herbicide glyphosate (Roundup) can cause cancer. [Photo courtesty Beyond GM]