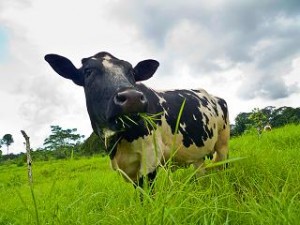 Researchers at Washington State University tested more than 400 milk samples from across the US and found that the ratio of omega-6 to omega-3 fatty acids in organic milk was healthier (2:3 averaged over a year, compared to 5:8 in conventional milk).

In addition, other health-promoting fatty acids, protein and nutrients (e.g. antioxidants) are also present in organic milk at higher concentrations. The research was published in the journal PLoS One.

While both omega-6 and omega-3 fatty acids are essential nutrients, too much of the former and not enough of the later is a risk factor for cardiovascular disease (CVD), some forms of cancer, and a range of other health problems.

The National Institutes of Health, for example, reports that:

“Most American diets provide more than 10 times as much omega-6 than omega-3 fatty acids. There is general agreement that individuals should consume more omega-3 and less omega-6 fatty acids to promote good health.”

So what does this mean?

In order to quantify what this might mean to people’s health the researchers looked at three different dietary interventions and their potential to improve the omega-6 to omega-3 ratio in the diet of a (fictional) healthy, active 30-year-old woman whose diet provided an 11:3 ratio of omega 6 to omega-3. The goal was to get her diet closer to the more favourable 2:3 ratio.

Perhaps not surprisingly, simply choosing healthier, but similar alternatives for three foods known to have high levels of omega-6 fatty acids, would produce 70% of the needed reduction in the omega-6 to omega-3 ratio.

Dozens of studies, most of them conducted in Europe, have shown higher levels of health-promoting omega-3 fatty acids in organic milk compared to conventional milk, as well as lower levels of omega-6 fatty acids.

But this is the first major study of this effect in the US. The researchers believe that the difference they have uncovered is highly significant and likely represents the most important nutritional benefit from consumption of organic food in the US.

The findings are also a boon for organic dairy producers. Organic farmers rely much more heavily than conventional farmers on pasture and forage-based feeds that promote omega-3 fatty acids in milk, while conventional dairy farmers have become increasingly reliant on corn and other grain-based feeds that increase omega-6 fatty acids in milk.  Grain-heavy rations also reduce the protein content of milk.

Reviewing the findings, lead researcher Charles Benbrook,  a research professor at Washington State University’s Center for Sustaining Agriculture and Natural Resources advised that if you can’t afford to buy organic, you should drink whole milk over reduced-fat varieties which are missing the healthy fats naturally found in milk. At the same time, however, you should cut back on other foods containing omega-6 fatty acids, like fried food, which can be dangerous for your heart at high levels.