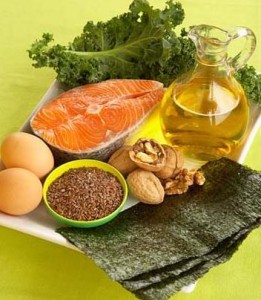 You don't necessarily need to take fish oil to get the benefits of increased omega-3s in your diet. Vegetable sources can be just as healthy.

Land or sea: what’s the best type of omega-3?

A great deal of debate has gone on over whether the ‘best’ omega 3s are to be obtained from plant sources or from fish.

If you are a vegetarian or make supplement choices based on environment issues such as over-fishing and the destruction of the ocean habitat it can sometimes feel as if you are compromising.

However new evidence suggests that increasing the amount of omega-3s in your diet, whether from fish or flax, will likely decrease your risk of getting heart disease

Omega-3 fatty acids are considered essential for human health, but the body does not produce them — therefore they must be consumed in order to maintain appropriate levels.

Depending on the source we can get omega-3s in our diet from several different types of foods.

EPA and DHA can be found in seafood and fish oil, and are often consumed in the form of dietary supplements. ALA is found in flaxseed and its oil, vegetable oils, and some nuts, and is now available in supplement form.

Other sources of ALA, EPA and DHA are fortified foods such as orange juice, eggs, peanut butter, margarine and bread, among others. While there are many other omega-3 fortified foods in the market place, most are relatively low in these healthy essential fatty acids.

The benefits reported for marine EPA and DHA are stronger because supplements of EPA and DHA appeared first and have been under scientific scrutiny for longer. In these early studies EPA and DHA was the only difference between the treatment and control groups

In later studies looking at plant derived omega-3s like ALA there were often diet differences beyond ALA between the treatment and control groups.”

In a recent review of  existing literature on the subject, researchers have come to the conclusion that ALA is likely just as effective in preventing cardiovascular disease as EPA and DHA have proven to be.

The researchers say that dietary recommendations should now be amended to increase the amount of ALA consumed.

You don't necessarily need to take fish oil to get the benefits of increased omega-3s in your diet. Vegetable sources can be just as healthy.