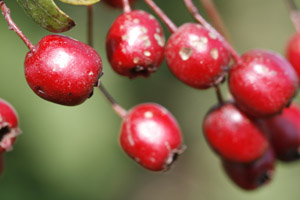 Hawthorn (Crataegus species), a member of the rose family commonly planted along hedges to deter trespassers with its prickly branches, has heart-healthy properties that ancient Greeks and Native Americans recognised centuries ago.

Sometimes called the Thorn Apple, there are over 1,000 different species and hybrids of Crataegus throughout the world. The two species most commonly used for medicinal purposes in Western herbalism are Crataegus oxyacantha (now known as Crataegus laevigata) and Crataegus monogyna.

The distinctive shrubs and small trees, which produce delicate flowers in the spring and bright red berries in the late summer, are native to the temperate regions of the Northern Hemisphere in Europe, Asia and North America. Both the berries (or ‘haws’) and flowers are used medicinally and all species of Crataegus  appear to have similar healing properties.

Hawthorn is particularly helpful in treating heart conditions associated with ageing. The German Commission E specifically recommends hawthorn leaf and flower for this purpose – though the berry can be equally effective.

Rich in antioxidant polyphenols, hawthorn appears to work by helping strengthen the heart muscle, reducing or preventing degeneration of blood vessels and improving blood flow by dilating the coronary arteries.

Taken regularly it may help to reduce feelings of tightness in the chest and reducing blood pressure. It may also help to induce a regular heart rhythm and acting as a beta-blocking and angiotensin converting enzyme (ACE) inhibitor. It also has a role to play in helping to control high blood pressure.

Atherosclerosis is caused by when low density lipoprotein (LDL), or ‘unhealthy’ cholesterol is oxidised causing plaques to build up in the arteries. These plaques narrow the passageway and ultimately affect the amount of blood flow to the heart. This can further lead to complications such as heart attack and stroke Scientists are currently investigating hawthorn’s bioactive compounds as a substance that can prevent the oxidation of “bad” cholesterol in the body.

An analysis of existing data in 2012 showed that supplementing with hawthorn may improve symptoms of heart failure such as dyspnea, fatigue and physical capacity.

Other evidence shows it can potentially reduce the incidence of sudden cardiac death, at least in patients with less compromised left ventricular function.

Animal studies suggest that, with regular use, if you do have a heart attack, hawthorn may reduce the size of the attack, and prevent heart cell loss after experimentally induced heart attack or stroke.

As effective as conventional treatments

Some small studies suggest that hawthorn can be as effective as conventional medications.

One early German-language trial in 1994 compared hawthorn extract with ACE inhibitor captopril on 132 patients. Captopril is a medicine used to lower blood pressure, to relieve symptoms of congestive heart failure and to improve survival after a heart attack. Hawthorn seemed to have similar effects as captopril on measurements such as exercise tolerance, fatigue and dyspnoea. In addition hawthorn extract did not trigger any adverse effects.

More recently in 2003 a study of 102 patients diagnosed with mild cardiac insufficiency showed that a preparation of hawthorn improved several symptoms of cardiac insufficiency, a sign of congestive heart failure. In this case hawthorn extract (900 mg/day) taken for 2 months was as effective as low doses of captopril (a prescription heart medication) in improving symptoms of heart failure.

Good for a broken heart, too

Hawthorn’s on the heart may not just be physiological. Though not well researched hawthorn is also used to help to treat sadness, for instance from bereavement and for low self-esteem. Symptoms such as anxiety, nervousness, and sleeplessness may respond to supplementation with hawthorn.

The emotional experience of broken hearts and physiological experience of heart failure share a number of neurohormonal mechanisms and depression’s link to heart failure is well established. Most recently data has shown that loneliness can trigger the kind of inflammation that is linked to heart disease and other health problems.

Anti-tumour and other benefits

Research has shown that polyphenols derived from the fruit of the tree have anti-tumour activities on skin, indicating a potential use in preventing skin cancer. Scientists are also beginning to research the effects of Chinese hawthorn on the inflammation that is a hallmark of liver disease. Preliminary animal and cell culture study results are promising; however more research is needed to determine if this therapy is viable for humans.

Hawthorn has an astringent effect which can be useful for diarrhoea and dysentery. It is sometimes recommended during the fluctuations of the menopause for debility or night sweats. Hawthorn also has a diuretic effect, which can help relieve fluid retention.

Hawthorn is generally very safe but if you are taking beta-blockers or digitalis it should be used only under the guidance of an herbal practitioner as it may have an ‘additive effect’ to these drugs that can result in a very slow pulse rate. Similar cautions apply if you are pregnant.

It can take a few months before you feel its full beneficial effects. As a general guideline try taking: