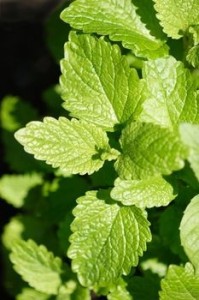 Lemon balm has been used for centuries for its calming, soothing and healing properties

It is a staple of wild and herb gardens, where it attracts bees, butterflies and other precious pollinators. But Lemon balm (Melissa officinalis) has also been used for hundreds of years for its calming, soothing and healing properties.

Take a walk in the garden and rub your fingers on some lemon balm leaves and your fingers will smell tart and sweet, like lemons. Those leaves are similar in shape to mint leaves, and indeed the two plants come from the same plant family, which is why they share some similar medicinal properties – and are often used together.

Lemon balm is an uplifting herb that has long been known for its aromatic qualities and its culinary uses. The Greeks relied on it to treat insomnia, to calm nerves and alleviate anxiety.

Other traditional medicinal uses have included improving appetite, and easing the pain and discomfort from indigestion (including gas and bloating, as well as colic). It was, and continues to be, used as an ingredient in Mediterranean dishes, as a garnish, as a fresh flavouring for deserts and sweets and to make hot and cold teas.

Lemon balm is also one of the ingredients used to make the infamous botanical-based liqueur Absinthe, sometimes called the ‘green fairy’ for its alleged psychoactive properties.

Today’s science has shown that there was ancient wisdom behind using this herb to relieve insomnia and to induce a relaxed and serene state of mind.

Recent studies have shown, for instance, that the plant is rich in volatile, oils called terpenes, which have mild sedative properties and are effective in alleviating moderate anxiety and stress.

Animal data shows it relieves stress and anxiety and sleeping disorders effectively. But human studies that focus exclusively on lemon balm are harder to find. Instead we very often find it studied in combination with other, complementary herbs such as mint, hops or chamomile.

The lemon balm/valerian mix is one of these classic combinations that has been studied many times, mostly in small studies, in humans.

There has, however, been one double-blind placebo-controlled study (that has looked at the anti-anxiety effects of a lemon balm and valerian (Valeriana officinalis) combination on. This trial of healthy young adults found that a lower dose (600mg) of lemon balm and valerian was effective at reducing anxiety but, surprisingly a higher dose (1800mg) was associated with a small increase in state anxiety, reinforcing one of the principles of natural medicine – that more is more always better!

In another small German language study of sleep quality in adults by Dressing and colleagues the researchers compared the effect of the lemon balm/valerian combination with that of the benzodiazepine sleeping drug triazolam (Halcion). The effectiveness of the herbal combination was similar to that of Halcion, as determined by its ability to help users fall asleep and the quality of sleep.

A small 2006 study found that a blend containing Melissa officinalis, Mentha spicata (spearmint) and Coriandrum sativum (coriander) alleviated the severity and frequency of  abdominal pain and discomfort of IBS better than placebo.

Lemon balm shows promise in a few other areas as well.

In a small study in 2003 taking a standardized extract of lemon balm by mouth, 60 drops daily for 4 months, appeared to reduce agitation and improve symptoms of mild to moderate Alzheimer’s disease.

Lemon balm can grow in most gardens and is a delight to harvest fresh to use in cooking and home remedies.

It can be used in several simple ways to maintain health, for instance:

Infusion – 1 heaped teaspoon of the dried herb, or double that amount of the fresh herb, to 175ml boiled water can be taken 3 times daily for depression, nervous exhaustion, indigestion or nausea. For children use a more dilute dose.

Essential oil – Add 5-6 drops to15ml (1 tbl) of almond oil and use as a massage oil for depression and tension as well as to relieve asthma and bronchitis. This can also be dabbed on cold sores at the first sign of symptoms. You can also add 1 ml (20 drops) to 100ml of water in a spray bottle and spray on your skin to repel insects.

For a delicious way to get the benefits of fresh lemon balm you might also want to try our recipe for Lemon Balm and Honey Purée.

Lemon balm has been used for centuries for its calming, soothing and healing properties