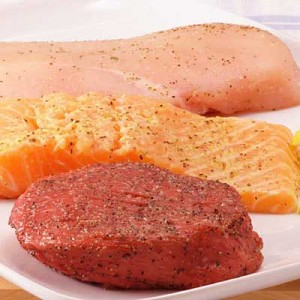 Eating the right amount of healthy protein for your age and physical needs, is the key to health and longevity.

Surf or turf? Scientists wrestle with the protein question (again)

Natural Health News — We all have to eat, but that doesn’t mean that understanding nutrition is easy. The issue of protein – how much and what type – is a good case in point.

Two new studies suggest that not all sources of dietary protein are the same and that the benefits of healthy sources of protein are far more complex than we first thought.

In the first study Californian researchers tracked a large sample of adults for nearly two decades. They found that eating a diet heavy in animal protein during middle age makes you four times more likely to die of cancer than someone with a low-protein diet. In fact the effect was comparable to smoking.

Not only is excessive protein consumption linked to a dramatic rise in cancer mortality, but middle-aged people who eat lots of protein from animal sources – including meat, milk and cheese – are also more susceptible to early death in general, reveals the study in the journal Cell Metabolism.

Crucially, the researchers found that plant-based protein, such as those from beans, did not seem to have the same mortality effects as animal proteins. Rates of cancer and death also did not seem to be affected by controlling for carbohydrate or fat consumption, suggesting that animal protein is the main culprit.

Prior to this study, says corresponding author Valter Longo, the Edna M. Jones Professor of Biogerontology at the University of Southern California (USC) Davis School of Gerontology, research had never shown a definitive correlation between high protein consumption and mortality risk. However, many studies have shown a correlation between high consumption of animal products (and a corresponding low intake of fruit and vegetables), and illnesses such as cancer, diabetes and heart disease.

More interesting than the sensationalist headlines claiming that meat is as damaging as smoking were some of the subtleties of the study.

For instance, rather than looking at adulthood as one monolithic phase of life, Longo and colleagues looked at how biology changes as we age, and how decisions in middle life may play out across the human lifespan.

In other words, what’s good for you at one age may be damaging at another. Protein, for example, controls the growth hormone IGF-I, which helps our bodies grow. But levels of IGF-I have also been linked to cancer susceptibility. Levels of this growth hormone drop off dramatically after age 65, leading to potential frailty and muscle loss. The study found that while high protein intake during middle age is very harmful, it is protective for older adults: those over 65 who ate a moderate- or high-protein diet were less susceptible to disease.

“The majority of Americans are eating about twice as much proteins as they should, and it seems that the best change would be to lower the daily intake of all proteins but especially animal-derived proteins,” Longo said. “But don’t get extreme in cutting out protein; you can go from protected to malnourished very quickly.”

The World Cancer Research Fund (WCRF), which has done extensive study into red meat consumption, recommends no more than 500g (1 lb) of cooked meat per week.

Unlike red and preserved meats, fish is generally considered a good source of healthy protein. Oily fish in addition has long been known to be beneficial for heart health. But the exact mechanisms by which fats and other useful nutrients found in fish work in the human body are not fully known.

In a second , much smaller study, published in PLOS ONE, Finnish researchers found that increasing the intake of fatty fish to 3-4 meals a week increases the number of large HDL particles. Large HDL particles are believed to protect against cardiovascular diseases.

Population-based studies have shown that HDL cholesterol – known as ‘good’ cholesterol, because it oxidises less readily and is therefore less likely to cause damage to the tissues and arteries – and in particular large HDL particles are efficient in sweeping extra cholesterol off artery walls. Large HDL particles have been associated with reduced risk of cardiovascular diseases, whereas small HDL particles may even have opposite effects.

In this study, participants ate a 100-150g (3-5 oz) serving of fatty fish such as salmon, rainbow trout, herring and vendace. No added butter or cream was used in the preparation of fish. Overall a higher intake of fish increased the number of large HDL particles and lipids contained in them.

Traditionally, cholesterol is divided into ‘bad’ LDL cholesterol and ‘good’ HDL cholesterol, but technology used in this study allows the investigation of a total of 14 different particle classes – suggesting that simplistic ‘bad’ and ‘good’ labels may prevent a deeper understanding of healthy eating.

The researchers emphasize that a dietary approach to the treatment of increased overall and LDL cholesterol levels is important.

Their findings – which also showed that increased intake of wholegrains and bilberries tipped the balance towards larger HDL particles – are well in line with most healthy eating recommendations which encourage a reduction in the consumption of red meat and an increase in the consumption of fish and other sea foods, alongside fresh produce and whole grains.

Eating the right amount of healthy protein for your age and physical needs, is the key to health and longevity.