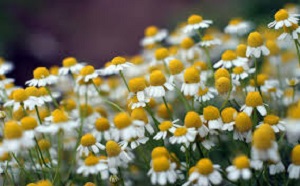 The study involved 113 patients with thyroid cancers. Researchers compared their dietary habits from 1990 through to 1993 and made a comparison with 138 people who don’t have the cancer as well as 286 people who had a benign case of thyroid disease. Researchers examined the subjects’ diet, medical history, lifestyle and consumption of beverages like alcohol, coffee and tea.

What they found was that higher consumption of chamomile tea led to a lower probability of developing thyroid problems.

» Drinking chamomile tea 2-6 times a week has been shown to lower thyroid cancer risk by 70%.

» Higher consumption lead to a higher rate of protection.

» Chamomile contains a natural antioxidant, apigenin, which has been shown to have anti-cancer properties.

Specifically, the study in the European Journal of Public Health found a 70% decline in risk for those who drink the tea about 2-6 times per week and an 80% decrease if the consumption goes on for 30 years.

The researchers also looked at the connection between thyroid cancer and consumption of two other types of herbal tea popular in Greece – sage tea and mountain tea (Sideritis, also known as ironwort or Shepherd’s tea) – and found that these also reduced the likelihood of malignancies, though the association wasn’t as strong as it was for chamomile tea.

The first study of its kind

According to the authors: “Although in the last decade several studies have addressed the protective role of black and green tea on several diseases, including cancer, there are only few and controversial studies on the effect of tea on benign and malignant thyroid diseases…Our findings suggest for the first time that drinking herbal teas, especially chamomile, protects from thyroid cancer as well as other benign thyroid diseases.”

Indeed a recent study found that the main antioxidant in green tea epigallocatechin-3-gallate (EGCG) can trigger a cycle that helps the body destroy oral cancer cells, while leaving normal cells unharmed. But this is the first study to link chamomile – arguably the world’s most popular herbal tea, with cancer protective properties in humans.

While the study doesn’t prove chamomile tea prevents cancer, it adds to a growing body of evidence pointing to the potential health benefits of herbal remedies and infusions. It may also be possible that those who consumer herbal teas, also take part in other healthy behaviours that lower their risk of cancer in general. In this part of the world in particular, the Mediterranean diet may play a protective role.

Nevertheless, herbal teas may help protect against cancer or other diseases because of components linked to antioxidant and anti-inflammatory properties such as polyphenols and flavonoids. One of the main antioxidants in chamomile is apigenin, which is also found in celery, parsley, fruits, and other vegetables and herbs. Animal studies has shown that apigenin can slow cancer growth and shrink cancerous tumours, particularly of the breast.

Either way making chamomile tea a regular part of your diet is a healthy habit that may pay dividends in the long run.