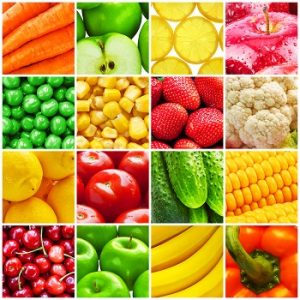 Foods rich in carotenoids and vitamin C can significantly reduce your risk of lung cancer - even if you are a smoker. [Photo: Bigstock]

Get your carotenoids from food to help prevent lung cancer

Natural Health News — People eating the highest intakes of carotenoids and vitamin C from fruit and vegetable in their diets may reduce their risk of lung cancer by 25%-35%, according to a new study

The research team from Montreal University also found that smokers who consume high quantities of fruit and vegetables, also reduce their risk.

Lung cancer is the most common cause of death from cancer worldwide, estimated to be responsible for nearly one in five deaths. Treatment is difficult and finding ways to help prevent – in addition to giving up smoking – it is important.

The scientists used food questionnaires to examine the relationship between intakes of dietary carotenoids and vitamin C with lung cancer risk in a group of more than 2500 smokers and non-smokers.

The questionnaires provided information on the participants’ fruit and vegetable consumption during the previous two years and divided the results into three groups with either low, moderate or high intake of various carotenoids.

In those with the highest intake the risk reductions of 25-35% compared to those with the lowest in take and were irrespective of age, gender or smoking status.

» Foods rich in the carotenoids beta-carotene, alpha-carotene, beta-cryptoxanthin and lycopene as well as Vitamin C provide significant protection against lung cancer in smokers.

» New data from Canada shows a diet rich in fruits and vegetables can lower the risk by 25-35%, with male smokers seeing the biggest benefits.

» The researchers also found that those with the highest intake of carotenoid- and vitamin C-rich foods also had a lower risk of squamous cell carcinoma, adenocarcinoma and small cell carcinoma.

When results of the study, published in Frontiers in Oncology, were analysed by different levels of smoking history, the protective effects were more gender specific.

The protective effect of elevated intakes of beta-carotene, alpha-carotene, beta-cryptoxanthin, and lycopene were greater in male heavy smokers.

By contrast, only vitamin C provided a significant benefit in female heavy smokers. Nevertheless, beta-carotene, beta-cryptoxanthin and lycopene did confer some protection in female moderate smokers.

The study also found a link between higher carotenoid intake and decreased cell development in different subtypes of cancer.

The researchers suggested that the hopeful results in their study could be because carotenoids were from dietary fruit and vegetable consumption whereas in the CARET and ATBC trials they were supplement based. (see our story Can antioxidants be killers? for more on this)

“Fruits and vegetables containing carotenoids and vitamin C are also rich in other nutrients and phytochemicals which could be responsible for their observed protective role against lung cancer.”

In conclusion, they added, “even though smoking remains the strongest predictor of lung cancer risk, it appears desirable, in light of these findings, to further promote consumption of fruits and vegetables rich in carotenoids and vitamin C to reduce the lung cancer burden among both smokers and non-smokers.”

Other research has shown that high dietary antioxidant intake could prevent 1 in 12 cases of pancreatic cancer and similar conclusions about the beneficial differences between supplements and foods, have been drawn in studies about calcium and heart disease.

Foods rich in carotenoids and vitamin C can significantly reduce your risk of lung cancer - even if you are a smoker. [Photo: Bigstock]