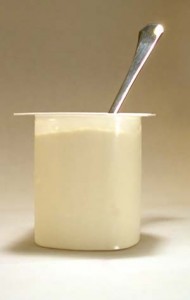 Plain yoghurt is one of many common foods that are a good dietary source of calcium [Image: Morguefile]

Calcium supplements – the good news and the bad news

In one, calcium and vitamin D showed improvements in weight loss, hormonal balance and menstrual regularity in women with polycystic ovary syndrome (PCOS).

One hundred infertile PCOS women were randomly divided into two groups. Group 1 was treated with metformin (an anti-diabetic drug sometimes used to treat PCOS) 1500 mg/day, and group 2 was treated with a daily dose of metformin 1500 mg and calcium 1000 mg plus a monthly dose of vitamin D 10,0000 IU for 6 months.

In the group received vitamin D and calcium there was a significant reduction in body mass index (BMI) and better improvements in menstrual abnormalities, follicle maturation and infertility.

The study was published in the journal Complementary Therapies in Clinical Practice.

PCOS is a complex metabolic condition that affects 5-10% of women of reproductive age. Women with PCOS often suffer from weight gain, unwanted body hair and have difficulty becoming pregnant. Central to the condition is a loss of capacity to use blood sugar properly, a situation referred to as insulin sensitivity. Previous studies have shown that calcium and vitamin D have can improve insulin sensitivity and weight loss.

Interestingly, at the start of the study, 83% of participants were vitamin D deficient and 35% were severely deficient – a problem that is becoming more and more widespread in the West. Post treatment, 74% of the women had adequate vitamin D levels.

In a second study in the journal Heart, researchers collected data on nearly 24,000 people from Heidelberg, Germany who were taking part in a long term study of cancer and nutrition. All were between the ages of 35 and 64 when they joined the study between 1994 and 1998.

Data about their diet and supplement use revealed that those whose calcium intake from all sources was moderate – 820 mg a day – had a lower risk of heart attack than those whose intake was less.

Increased intake of more than 1,100 mg did not substantially lower this risk. In addition, in this study, there was no level at which calcium could be linked to a decreased risk of stroke.

When the team looked specifically at calcium supplements, they found an 86% increase in heart attacks among people who took them regularly,along with dietary sources, compared to those who didn’t take any supplements. Those whose only significant source of calcium was supplements had more than double the risk of heart attacks. Dietary calcium, on the other hand, was not associated with a higher risk.

The suggestion is that high doses of calcium might damage the walls of blood vessels, which in turn leads to heart attacks. This has yet to be proved, however if so it is a good argument for getting adequate calcium from your diet. It is also a good argument against taking calcium supplements ‘just in case’ since the benefits for some may well outweigh the risks.

While vitamin D can only be obtained through adequate sunlight exposure or supplementation calcium is readily available in dietary sources. In addition, many foods such a milk and soya products and cereals are fortified with calcium.

You may not need to choose fortified foods, however, if you include a wider variety of calcium-rich foods in your daily diet. See our Calcium-rich Foods chart for more information.

Plain yoghurt is one of many common foods that are a good dietary source of calcium [Image: Morguefile]