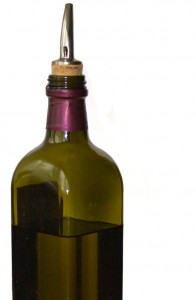 Olive oil has long been associated with a heart-healthy diet [image: by bluescreen ~ via Morguefile http://mrg.bz/WE93B2]

Olive oil, which has long been associated with a heart-healthy diet, has now also been linked with a lower risk of stroke in older people.

French Researchers surveyed 7,625 people age 65 or older living in Bordeaux, Dijon and Montpelier to determine their levels of olive oil consumption. They then followed these individuals for five years to determine the occurrence of stroke.

Olive oil has long been known to be protective against heart disease. However, the results published in the journal Neurology showed that those who regularly used olive oil had a 4% lower risk of stroke than  those who did not. The benefits of regular olive oil use remained even after the researches took into account things like diet, exercise and weight.

None of the participants had a history of stroke or heart attack prior to joining the study. Most olive oil users used extra virgin olive oil.

Olive oil has long been associated with a heart-healthy diet [image: by bluescreen ~ via Morguefile http://mrg.bz/WE93B2]