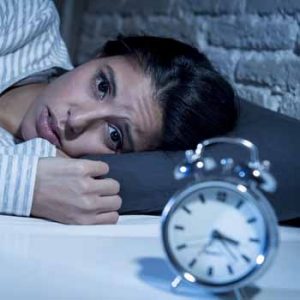 How we sleep has big health implications, not just for insomnia but for diseases like diabetes and cardiovascular disease, say scientists. [photo: Bigstock]

During 5 nights in a sleep lab, participants spent 9 hours in bed from 10 p.m. to 7 a.m., sleeping for 7 hours and 35 minutes on average per night. Objective sleep data were gathered nightly by polysomnograhy – which records brain waves, oxygen levels in the blood, heart rate and breathing, as well as eye and leg movements.

» A small study has found that what we eat during the day can influence how well we sleep at night.

» The US scientists found that a high fibre diet predicted more deep sleep – the sleep we need to rest and repair, while a high sugar and fat diet was associated with less deep sleep.

» Apart from helping us to make better lifestyle choices the scientists say the finding also has implications for how we treat hypertension, diabetes and cardiovascular disease all of which have links with sleep quality.

How well the participants slept was measured first after 3 days of controlled feeding in which they consumed a healthy low fat diet, and then again on night 5, after one day when participant were encouraged to eat when and what they wanted.

Slow wave sleep, sometimes referred to as ‘deep sleep’ allows the brain to recover from its daily activities. It is thought to be vital for imprinting and consolidating new memories. It’s good for the body too since this is the time that hormones and other chemicals are released into the bloodstream that help control cellular repair, glucose metabolism and appetite.

Diet and sleep work together

Principal investigator Marie-Pierre St-Onge, PhD, assistant professor in the department of medicine and Institute of Human Nutrition at Columbia University Medical Center in New York, NY noted “It was most surprising that a single day of greater fat intake and lower fibre could influence sleep parameters.”

The study underscored the fact that diet and sleep two sides of the same coin when it comes to a healthy lifestyle – and that both are influenced by our own lifestyle choices.

According to the authors, the study suggests that diet-based recommendations might be used to improve sleep in those with poor sleep quality. But the implications may go beyond that.

“The finding that diet can influence sleep has tremendous health implications, given the increasing recognition of the role of sleep in the development of chronic disorders such as hypertension, diabetes and cardiovascular disease,” said St-Onge.

How we sleep has big health implications, not just for insomnia but for diseases like diabetes and cardiovascular disease, say scientists. [photo: Bigstock]