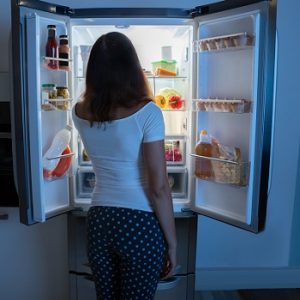 Natural Health News — New findings suggest that eating late at night could be more dangerous to your health than previously thought.

Compared to eating earlier in the day, it can increase weight, insulin and cholesterol levels, and negatively affect fat metabolism, and hormonal markers implicated in heart disease, diabetes and other health problems, according to results from researchers at the Perelman School of Medicine at the University of Pennsylvania.

The findings which were presented at the recent 31st Annual Meeting of the Associated Professional Sleep Societies, offer the first experimental evidence on the metabolic consequences of consistent delayed eating compared to daytime eating in humans.

In the study, nine healthy weight adults underwent two conditions, one of daytime eating (i.e., three meals and two snacks between 8 a.m. and 7 p.m.) for eight weeks and another of delayed eating (i.e., three meals and two snacks eating from noon to 11 p.m.) for eight weeks. There was a two-week washout period between conditions to make sure there was no carry over effect. The sleep period was held constant, between 11 p.m. to 9 a.m.

» New evidence suggests that eating late at night could be a significant contributor to weight gain.

» Scientist found that it can increase weight, insulin and cholesterol levels, and negatively affect fat metabolism, and hormone balance.

» These findings suggest that eating earlier in the day may be worth the effort, to help prevent chronic health problems such as diabetes and cardiovascular disease.

Participants visited Penn’s Center for Human Phenomic Science to get metabolic measurements and have blood drawn at the beginning, after the first eating test, after the two-week washout, and after the second eating test. This allowed the research team to measure changes in weight, metabolism and energy used over the assessment period.

The team found that when participants ate later, compared to the daytime condition, weight increased. Respiratory quotient, i.e. the ratio of carbon dioxide produced by the body to oxygen consumed by the body that indicates which macronutrients are being metabolised, also rose during the delayed eating condition, indicating later eating led to metabolising fewer lipids and more carbs.

The researchers also found that a series of other measures reflecting negative metabolic profiles increased in the delayed condition, including insulin, fasting glucose, cholesterol, and triglyceride levels.

Looking at a 24-hour hormonal profile, they also found that in during daytime eating condition, the hormone ghrelin, which stimulates appetite, peaked earlier in the daytime, while leptin, which keeps you satiated, peaked later, suggesting that the participants received cues to eat earlier, and eating earlier likely helped them to stay satiated longer. This suggests that eating earlier may help prevent overeating in the evening and at night. As sleep-wake cycles were constant, melatonin levels remained constant in both groups.

Similar yet much shorter previous studies have suggested similar results. For example, a study in 2009 was the first to make the link between meal timing with increased weight gain. Using mice it showed that eating at irregular times – the equivalent of the middle of the night for humans, when the body wants to sleep – directly influenced weight gain.

But this is the first long-term study looking at the timing of eating patterns that also controlled for sleep-wake cycles, exercise, macronutrient intake, etc. to pinpoint the effects of prolonged eating at different times of day.

“While lifestyle change is never easy, these findings suggest that eating earlier in the day may be worth the effort to help prevent these detrimental chronic health effects,” said Kelly Allison, PhD, an associate professor of psychology in Psychiatry and director of the Center for Weight and Eating Disorders, and senior author on the study. “We have an extensive knowledge of how overeating affects health and body weight, but now we have a better understanding of how our body processes foods at different times of day over a long period of time.”