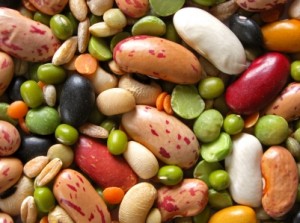 Adding pulses such as yellow peas, chickpeas, navy beans and lentils, to your diet can significantly reduce your risk of metabolic syndrome

Natural Health News — Adding pulses to your diet can significantly reduce your risk of metabolic syndrome, especially if you are already overweight.

At the end of the study period both groups showed reduced energy intake, waist circumference,  and better insulin sensitivity, indicating that including more pulses, which are low in energy and high in fibre.  In the diet was as effective as calorie restriction .

The researchers found that the pulses diet improved many other biochemical factors and an particularity interesting finding of the study was that HDL (healthy) cholesterol increased by 4.5% in the pulses group but decreases by 0.8% in the calorie restricted group.

Metabolic syndrome is an umbrella term for a set of risk factors that includes abdominal obesity,decreased ability to process glucose (increased blood glucose and/or insulin resistance), unhealthy lipid levels (dyslipidemia) and high blood pressure (hypertension). People who have this syndrome have been shown to be at an increased risk of developing cardiovascular disease and/or type 2 diabetes.

The condition affects around 25% of the UK population, 34 % of the US population.  Globally around a quarter of the world’s adults are thought to suffer from metabolic syndrome, the roots of which can be traced back to poor eating habits and a sedentary lifestyle.

Evidence for the benefit of pulses grows

This is one of three similar studies into the benefits of pulses to be published recently.

In another from the University of Medical Sciences in Tehran, Iran people in the highest quartile of legume intake were found 75 percent less likely than those whose intake was in the lowest quartile to be diagnosed with metabolic syndrome. The study was published this month in Archives of Iranian Medicine.

A third study also in the British Journal of Nutrition investigated the potential of a pulse-based diet in individuals 50 years or older for reducing cardiovascular disease (CVD) risk factors. A total of 108 men and women were randomised to receive pulse-based foods (two servings daily of beans, chickpeas, peas or lentils; about 150 g per day dry weight) or their regular diet for 2 months. Compared with the regular diet, the pulse-based diet decreased total cholesterol by 8.3% and LDL-cholesterol (LDL-C) by 7.9%, enough say the researchers to lower those people’s risk of CVD.

Adding pulses such as yellow peas, chickpeas, navy beans and lentils, to your diet can significantly reduce your risk of metabolic syndrome