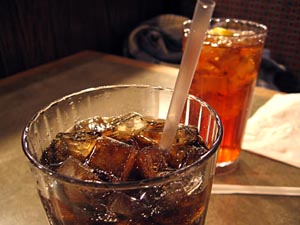 Science is revealing the multiple ways in which sodas can cause health problems [Image: aker - Morguefile]s

Stop, before you drink that soda…

Natural Health News — These are tough times for soda manufacturers, but before we shed too many tears for these purveyors of sugary beverages consider this.

The highly publicised proposed ban on super-size sodas, as part of an anti-obesity drive in New York City,  has got big manufacturers like Coca-cola scrambling to bolster public opinion.

Using social media platforms and traditional advertising, the soda giants are trying to argue that sodas aren’t that bad for you and that Mayor Bloomberg’s initiative is an attack on individual freedom of choice. They are also lobbying for politicians’ support ahead of the vote on the proposal this September.

In the mean time, corporate social responsibility (CSR) campaigns by both Coca Cola and Pepsi have been slammed as misleading and obfuscating by the medical press.

A recent series of articles in the online journal PLOS Medicine have taken a look at what the journal calls ‘ Big Food. The seven articles examine the activities and influence of the food and beverage industry in the health through the eyes of independent health experts and advocates.

According to nutrition professor Susan Whiting of the University of Saskatchewan in Saskatoon, sodas have become a cultural phenomenon. Having a bottle of pop once a month used to be a big deal, but now it is accepted with meals, Whiting said. As a result we are consuming more and more without much regard for the amount of sugar we are taking in.

Taking a leaf from Big Tobacco

The ethics of the soda industry, according to the PLOS Medicine article, are not unlike those of the tobacco industry. It’s all about increasing sales whilst diverting attention away from the damage that consumption does to health.

According to Andrew Cheyne, of the Berkeley Media Studies Group in California, these CSR campaigns “…echo the tobacco industry’s use of corporate social responsibility as a means to focus responsibility on consumers rather than on the corporation, bolster the companies’ and their products’ popularity, and to prevent regulation”.

One example cited was Pepsi’s Refresh project, which took advertising dollars away from the Superbowl, the single largest advertising event in the US, and put the money toward a social media campaign encouraging community groups to “refresh” park lands.

According to Cheyne, the company hired a marketing firm to have popular musicians perform and inform youth about the project, successfully targeting those aged 11 to 31.

The end result, say the authors, is that consumers will see the campaigns and consider soda companies to be more engaged in the community, which is why they’re doing it. Focus on these ‘good works’ serves to distract consumers from the damage that sodas can do to the body.

Your body on soda

This damage is brilliantly summed up in a recent infographic called A Sip of Soda – How Soft Drinks Impact Your Health. Click on the image (below) to see the full size version. 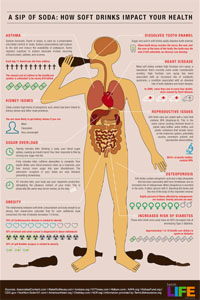 Soft drink manufacturers will argue that taken in moderation sodas are not harmful. But as the PLOS Medicine series argues, Big Food depends on our continued over-consumption to make a profit. And the effects of all these ‘big gulps’ are now beginning to be understood.

A 2006 review by researchers from the Harvard Public School of Health concluded that that consuming large amounts of sugar sweetened beverages was a key contributor to weight gain and obesity for both children and adults. But the relationship is more complex than simply sugar turning to fat.  Indeed even sodas with artificial sweeteners have been associated with continued weight gain.

So why are sodas so bad for us?

One answer, according to an overview of past research published in Obesity Reviews, is evolution.

Some short chain fatty acids are healthful. But too many can have numerous effects on health.

First, they can decrease satiety signals. This, “…may cause disruptions in our feeling full and hence prevent us from stopping to eat when we should,” explains review author Amanda Payne, Ph.D.

Overproduction of short-chain fatty acids – which also can be caused by consumption of regular sugar – also can also cause inflammation of the gut tissue.

This, in turn, can lead to leaky gut syndrome, where bacteria seep through damaged gut tissue into the blood stream and cause further inflammation leading to insulin resistance and an increased risk for coronary artery disease, stroke, and type-2 diabetes.

It can be hard to kick the soda habit, and maybe especially the diet soda habit, in favour of more healthful drinks such as water and herb teas. Years of cultural conditioning has meant that many of us see these concoctions as just part of daily life.

One way to take control is to consider making your own cordials from fruit and flowers (see our Sour Cherry Syrup  and Elderflower Cordial recipes and our Mint & Cucumber Lemonade recipe, for example).

Or you can try your hand at making a cola syrup from natural ingredients (minus the high fructose corn syrup) for occasional use when you want a treat or a pick-me-up.

Also, last year researchers from a US public radio programme, This American Life, stumbled across what looked like the original recipe for Coke. The radio programmers caused quite a stir when they published the recipe online; the Coca Cola company denied this was their recipe. This American Life, however, did not claim this was THE recipe – only that this was likely one of Coca Cola inventor John Pemberton’s original recipes.

What might be surprising to many – apart from the absence of high fructose corn syrup, artificial sweeteners,  and colourings  –  is the inclusion of so many natural essential oils and extracts.

Science is revealing the multiple ways in which sodas can cause health problems [Image: aker - Morguefile]s