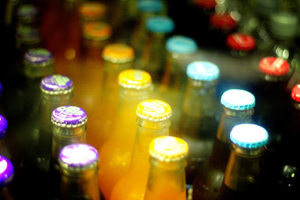 The research is published in Diabetologia the journal of the European Association for the Study of Diabetes and uses data culled from participants in the ongoing EPIC  (European Prospective Investigation into Cancer and Nutrition) trial which  is investigating dietary links to disease in European populations.

Since most research in this area has been conducted in North American populations, the authors wanted to establish if a link between sweet beverage consumption and type-2 diabetes existed in Europe.

The study included 12,403 type-2 diabetes cases and another group of 16,154 people, most of whom did not develop diabetes. The researchers found that, after adjusting for confounding factors, consumption of one 12oz (336ml) serving size of sugar-sweetened soft drink per day increased the overall risk of type-2 diabetes by 22%.

However, comments lead researcher Dr Dora Romaguera, from Imperial College London, the non-adjusted figure is also important since it is widely accepted by the scientific community that these models should not be adjusted for BMI, thus making meta-analysis comparison with other data possible.

Some risk from low cal sodas too

The authors also observed a statistically significant increase in type-2 diabetes incidence related to artificially sweetened soft drink consumption, but note this significant association disappeared after taking into account the BMI of participants. The researchers reason that this probably indicates that the participants’ weight rather than soda could be the cause. In other words, participants with a higher body weight tend to report higher consumption of artificially sweetened drinks, and are also more likely to develop diabetes.

Nevertheless studies are beginning to appear that link ‘fake’ sugars with weight gain.

Consumption of pure fruit juice and nectar (i.e. fruit juices that have been diluted to some extent and may contain sugar or sweeteners) consumption was not significantly associated with diabetes incidence, however it was not possible using the data available to study separately the effect of 100% pure juices from those with added sugars.

The study was based on responses to diet questionnaires and it is possible other factors not accounted for by the study influenced the disease risk. But taken together with existing studies it adds to a growing belief that sugary drinks are detrimental to health.

In addition to obesity and diabetes excess  soda consumption has also been associated with a higher risk of stroke , and of asthma and chronic obstructive pulmonary disease (COPD) as well as early death from multiple causes and violent behaviour in teens.

Dr Romaguera concludes: “Given the increase in sweet beverage consumption in Europe, clear messages on the unhealthy effect of these drinks should be given to the population.”