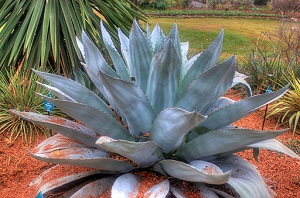 Agave contains substances called agavins that could be used as a low-calorie sweetener [Image: Wikimedia Commons]

Natural Health News — A sweetener created from substances found in the agave the plant could lower blood glucose levels for the millions worldwide who have type-2 diabetes and help them and the obese lose weight, researchers have claimed.

The substances, agavins, are a natural form of sugar found in the agave plant, are non-digestible and can act as a dietary fibre, so they would not raise blood glucose. The Mexican scientists presented their report at the 247th National Meeting of the American Chemical Society (ACS), in Dallas the world’s largest scientific society.

“We have found that since agavins reduce glucose levels and increase GLP-1, they also increase the amount of insulin,” said lead author Mercedes G. López, Ph.D.

GLP-1 (glucagon-like peptide-1) is a hormone that slows the stomach from emptying, thereby stimulating production of insulin.

López added, “Agavins are not expensive and they have no known side effects, except for those few people who cannot tolerate them.”

In addition, agavins, like other fructans, which are made of the sugar fructose, can help support growth of healthful microbes in the mouth and intestines, she said.

In the study López and her team fed a group of mice a standard diet and added agavins to their daily water. They weighed the mice daily and checked their glucose blood levels weekly. Most mice that drank agavins ate less, lost weight and their blood glucose levels decreased when compared to other sweeteners such glucose, fructose, sucrose, agave syrup and aspartame.

“This study represents the first attempt to evaluate agavins as sweeteners in spite of their lower sweetness compared to sugar,'” she said.

Not the same as fructose

The current study focuses on creating a low calorie sweetener, but many people interested in alternatives to sugar already use agave syrup, which is widely available now – so what’s the difference?

According to López, agavins are fructans, which are fructoses linked together in long, branched chains. The human body can’t use them in that configuration, so they don’t affect blood sugar, she explained.

These long-chain fructans sometimes get confused with agave nectar or agave syrup even though the fructans in agave syrup have been broken down into individual fructoses, making them much more similar to high-fructose corn syrup.

Also, she and her team believe agavins are better than artificial sweeteners, which are absorbed by the body and can cause side effects, like headaches. “One slight downside, however, is that agavins are not quite as sweet as their artificial counterparts,” she said.

More than 300 species of agave plants grow in the southern United States, northern South America, and the hilly regions of Mexico. Agave nectar has been used for centuries as a folk remedy for its medicinal properties. The Aztecs mixed it with salt and used it for skin infections and wounds.

Most agave syrups are produced from the blue agave plant. The core of the plant contains the aguamiel or “honey water,” the substance used for syrup production (and, when fermented, tequila) which is processed to form a syrup or nectar.

Processing the aguamiel yields a product with either a dark amber or light colour, and a consistency much like maple syrup and  similar number of calories to sugar. Where agave can be useful is in adding a distinct but not-to0-sweet flavour, similar to caramel, which has made agave a popular sweetener for energy drinks, teas, nutrition bars, and other processed ‘healthy’ foods.

However, as López has pointed out, the composition of agave syrup largely fructose and there is evidence to suggest that excessive fructose consumption deranges liver function and promotes obesity.  Most nutritionists recommend reducing the amount of fructose you eat, especially in the form of additives to snack foods.

Agave contains substances called agavins that could be used as a low-calorie sweetener [Image: Wikimedia Commons]