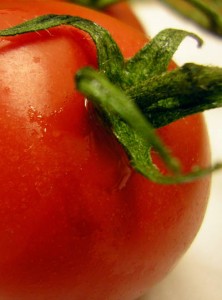 Lycopene-rich tomatoes have been shown to reduce the risk of stroke in men by more than 50% [Image: Dr Bob - Morguefile]

Natural Health News — Eating tomatoes and tomato-based foods – which are are high in the antioxidant lycopene – is associated with a lower risk of stroke in men, according to new research.

The study, published in the journal Neurology, found that those with the highest amounts of lycopene in their blood were 55% less likely to have a stroke than those with the lowest amounts.

The study involved 1,031 men in Finland between the ages of 46 and 65. The level of lycopene in their blood was assessed at the start of the study and they were followed for an average of 12 years. During that time, 67 men had a stroke.

The study also found  that smokers tended to have the lowest blood levels of lycopene. Smoking is a major risk factor for stroke.

“This study adds to the evidence that a diet high in fruits and vegetables is associated with a lower risk of stroke,” said study author Jouni Karppi, PhD, of the University of Eastern Finland in Kuopio. “The results support the recommendation that people get more than five servings of fruits and vegetables a day, which would likely lead to a major reduction in the number of strokes worldwide, according to previous research.”

The reason carotenoids in general might be expected to have an effect on stroke risk is that they help mediate the damage that free radicals, unstable molecules that are formed as part of normal metabolism, but also in the presence of toxins such as cigarette smoke, can cause  to vital organs and tissues as well as blood vessels and nerves.

“One possible reason that lycopene might decrease the risk of stroke more than other antioxidants…may be the consequence of antioxidant activity,” write the researchers. Lycopene is a potent antioxidant and in this study was more effective than beta-carotene in protecting cells against a variety of differently types of free radicals.

Turn up the heat

While many beneficial nutrients are heat-sensitive, when a tomato is cooked, the heat processing actually increases the levels of cis-lycopene, which is easily absorbed by the body.

As a result cooked tomatoes and tomato products tend to have a greater effect on blood levels of lycopene than raw tomatoes or tomato juice.

Lycopene in the diet also has other functions such as reducing inflammation, blocking cholesterol synthesis, boosting immune function, and inhibiting platelet aggregation and thrombosis.

Other studies have shown that high lycopene levels may be linked to a reduced risk of certain cancers.

For instance a review in 2011 found that eating more tomatoes and tomato products can make people healthier and decrease the risk of conditions such as cancer, osteoporosis and cardiovascular disease, according to a review article the American Journal of Lifestyle Medicine.

Earlier this year a study in the British Journal of Nutrition found that the lycopene in cooked tomatoes slowed the growth of or even kill prostate cancer cells. The scientists found that lycopene intercepts cancer’s ability to make the connections it needs to attach to a healthy blood supply.

Tomatoes are not the only food that is rich in lycopene. Other sources include pink grapefruit, watermelon,  guava, papaya, sea buckthorn berries, wolfberries (goji berries) and rosehips.

The food with the highest levels of lycopene is actually the gac – a vine fruit native to Southeast Asia which is not usually available outside that region. Some healthfood shops sell antioxidant dietary supplements and juices containing gac.

Lycopene-rich tomatoes have been shown to reduce the risk of stroke in men by more than 50% [Image: Dr Bob - Morguefile]