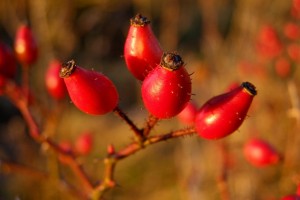 Rosehips – a gift from autumnal hedgerows

Of all the natural sights in the season of ‘mists and mellow fruitfulness’ rosehips are the most easily recognisable.

Rosehips appear after the flower has blossomed and died and in cultivated rose gardens gardeners tend to prune them off to encourage future flower growth. But in wild hedgerows, where anyone is free to pick them, these firm fat seed pods are a familiar sight and although they are largely underused these days they are full of healing goodness.

The oil pressed from the seeds is high in both linoleic (omega-6) fatty acid and linolenic (omega-3) fatty acids. Rosehip seed oil is now popular in cosmetics and is a rich and luxurious way to care for your skin. It is of particular benefit to mature and sensitive skins and can aid the healing wounds and soften the appearance of scars. Because of its anti-inflammatory properties useful for those prone to acne.

Rosehips contain vitamins A, B1, B2, B3, K. They also contain iron, a wide variety of antioxidants such as flavonoids and polyphenols, volatile oils and tannins. But it is their vitamin C content for which they are most well known. During the Second World War rosehip syrup was an important source of vitamin C for children.

All varieties of roses produce rose hips – in a riot of beautiful reds, oranges and even purples – and can be used in the kitchen to make a healthful syrup as well as jellies and jams and as an addition to things like fruit crumbles.

The dried leaves and fruits can be used to make a tangy tea. Much of the vitamin C content of the rosehip is lost in brewing but its iron content remains. Because of this women used to drink the tea during menstruation to make up for the iron that they lose with the blood. Traditionally rose hips were also recommended as a diuretic, laxative and stomach soother – though science has yet to prove this is the case.

But the hips of the dog rose, Rosa canina, have recently come under scientific scrutiny and have been shown to contain unique compounds that can, in addition, benefit arthritis and joint pain sufferers.

There have been a number of small studies in this areas, but in 2008 Danish and American researchers pooled the results of the three highest quality studies (that is to say randomised placebo-controlled trials) in what is known as a meta-analysis to see if they could come to a firm conclusion about the overall benefit of taking rosehip powder.

The analysis published in the journal Osteoarthritis and Cartilage included around 300 people and found that rosehip powder does reduce pain in some cases by as much as 60%. It also found t that people taking Rosa canina were twice as likely to “respond to therapy” than those taking a placebo and that they were less likely to need to turn to what they called  “rescue” medication, i.e. conventional painkillers.

Here are three ways to use rosehips in your own home:

Tea. A traditional tea blend is a mixture of rosehip and hibiscus. Hibiscus taken as a tea has blood pressure lowering properties and like rosehip it also has anti-inflammatory properties. Try using equal parts of each (about a teaspoon of each dried herb per cup) infused in boiling water.

Powder. Rosehip powder comes in capsule form can be expensive. If you want to experiment with making your own, a simple way to use them is to gently dry and then finely grind the whole rosehip (pulp, seeds and all). A coffee grinder or hand blender will help enormously. Try adding two teaspoons (about 10g) to hot water, sweeten to taste, and drink several times per day. In this way, all of the most nutritious ingredients are imbibed – pulp, seeds, oils, vitamins and fatty acids.

Syrup. Again you can buy rosehip syrup or try making it yourself. You’ll need:

Put two litres of water in a large pan and bring to the boil. Throw in the chopped rosehips, bring back to the boil. Remove from the heat, cover and leave to infuse for half an hour, stirring occasionally.

Strain this mixture through a jelly bag (alternatively, line a colander with a couple of layers of muslin and place over a large bowl. Pour in the rosehip mixture, and leave to drain suspended over a bowl.)

Set the strained juice aside. Transfer the rosehip pulp back to the saucepan, along with another litre of boiling water. Bring to the boil, remove from the heat, infuse for another half an hour and strain as before.

Discard the pulp and combine the two lots of strained juice in a clean pan. Boil until the volume has decreased by half, then remove from the heat.

Add the sugar and stir until dissolved. Return to the stove, bring to the boil and boil hard for five minutes. Pour into warmed, sterilised jars or bottles and seal.

The syrup can be taken neat or diluted in water for a cordial or even used in cocktails!