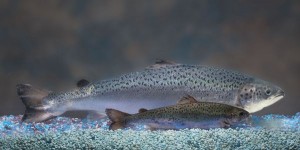 Natural Health News — Genetically modified salmon could be on its way to your table, unless you take action now.

Over the recent holiday period news emerged that the US Food and Drug Administration was pushing through approval for a mutant salmon, spliced together in the lab by the company AquaBounty.

In fact, the FDA had quietly published reports supporting the environmental and health advantages of the fish back in May 2012. But according to an in-depth investigation in the journal Slate, news of the approval was put on hold to keep the issue of GM out of the US presidential election. It was only after this investigation was published that the FDA chose to alert the public of its actions, over the busy holiday period.

The AquaAdvantage fish – perhaps inevitably dubbed a ‘frankenfish’ in the press and by campaigners – has been inching its way onto the market since 1989.

It has been given genes from the Chinook salmon and the eel-like ocean pout, which allows it to grow all year round, not just when water conditions are favourable. It is also engineered to grow twice as quickly as a conventional Atlantic salmon.

Despite the GMO salmon actually being blocked by Congress in 2011 due to serious health and environmental concerns, the FDA has consistently demonstrated its willingness to disregard these concerns, and drive approval for the fish through.

Indeed, in order to fulfil its long held ambitions the FDA, under George W. Bush’s administration, actually classified the GM process which produces the fish as a drug in order to expedite the approval process. Approval for drugs in the US takes less time than approval for genetically modified food.

As well as salmon, the AquaBounty company is also developing hybrid trout and tilapia which are also designed to grow faster than traditional fish.

The FDA has ruled that the salmon is ‘substantially equivalent’ to normal salmon and therefore poses no health risk, even though there have been no independent long term studies. Indeed all of the studies submitted to the FDA were performed by AquaBounty.

The sparse research for the fish means we cannot understand the long-term health effects of consuming it. Worse course consumers will have no possibility of demonstrating their disagreement with this conclusion – unless they avoid Salmon completely – because GM products are not labelled.

The sloppy science behind the fish is par for the course and shows the contempt that most biotech companies have for public concern.  Just recently, for example, it was revealed that a US funded study of GM rice in China violated important ethical guidelines by feeding GM rice to children without obtaining their parents consent.

The salmon eggs will be produced in Canada, and the fish raised in tanks in Panama. This it turns out is key since, in order to justify approval, the FDA needed only to believe there was little likelihood that the salmon would affect the environment of the United States. Never mind that it could have an effect on the environments in other countries.

Although AquaBounty claims the resulting fish are sterile, that sterilisation process is not 100% guaranteed. This means there is the possibility that some of these fish could escape and breed with wild native salmon.

Once these two types of salmon interbreed, there is no way to remove that modified DNA from salmon populations. It is likely that mutated salmon would be less able to survive in the wild – the knock on effect being the decimation of the entire wild salmon populations.

Outrage at the US government’s sneaky antics has outraged consumers, environmentalists, and conservationists and raised not unreasonable fears that this salmon may open the flood gates for the approval of other GM animals.

There is now an open 60-day public consultation period – which ends February 25th – before the FDA approval is confirmed and US environmental and consumer groups are urging as many people as possible to write in and express their concerns.

The only thing that can effectively stop GM is concerted and consistent public action.